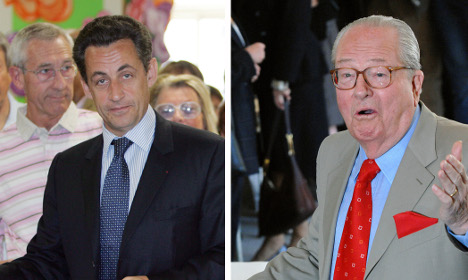 Jean-Marie Le Pen, the father of the current party leader Marine, has criticized his daughter for being too “centrist” and has suggested his real heir is Nicolas Sarkozy.

Sarkozy, who beat Jean-Marie Le Pen to become president of France in 2007, is fighting to win the centre-right primary election in November which would give him a strong chance of being re-elected as head of state next May.

As part his campaign to beat rival Alain Juppé to be the chosen conservative candidate in November’s primary, Sarkozy has occupied the terrain normally held by the National Front’s Le Pen.

He has spoken repeatedly of the need for France to put a stop to immigration, close its borders, lock up those suspected of having jihadist sympathies and of how Muslims must assimilate to French culture.

He also wants to take on Europe and end the deal that sees Britain's border on the French side of the English Channel.

As a result he has made Le Pen senior very proud and a little jealous. “He is occupying the ground that Marine Le Pen has abandoned to go to the centre. [Sarkozy] on the other hand has left the centre ground to head towards the nationalist and populist right, that is winning over public opinion due to the pressure of recent events,” said Jean-Marie Le Pen.

Le Pen also criticised his daughter for recently “renouncing the Front National's flame logo and the FN initials “that have got us so far. It’s suicidal,” he said.

At a recent election rally for Marine Le Pen’s 2017 campaign all mention of the National Front and even the name “Le Pen” were dropped from the posters as she attempts to distance herself from the more extreme elements within the party, like her father, and make herself more electable.

Le Pen senior, of course, has a reason or two to have a dig at his daughter.

He was unceremoniously banned from the party after he repeated inflammatory remarks he had made in the past, referring to Nazi gas chambers as a “detail of history.”

He is still fighting his corner through the courts.

His bitter dispute with his daughter means that she is not guaranteed her father’s vote in next year’s presidential election.

“I don’t know [who I will vote for]. Over the next seven months anything can happen,” he said.

Well, if Sarkozy wins the primary then we know who Le Pen senior will be voting for if he can’t bring himself to vote for his daughter.