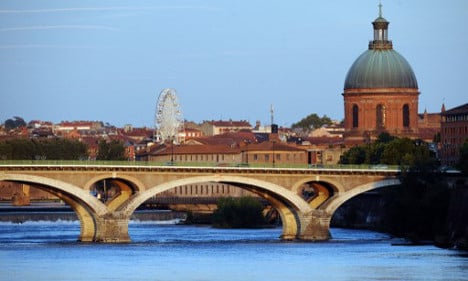 Photo: AFP
Move over Paris, move over Lyon. Toulouse is the city on the move, at least if you're talking increased wealth and economic growth.
Yes, the southern city recording a 31.6 percent increase in GDP per capita between 2003 and 2013, greater than any big city in the country.
This is based on a jump from €28,733 to €37,833 GDP per capita in Toulouse, compared the leap in Paris from €40,726 to €53,578 over the same period.
In fact, since 2010 no city in France has seen a bigger growth.
Toulouse soared 9.4 percent in this short period, compared to 3.8 percent in Paris. The only city that even came close to Toulouse, according to the report from BFM TV, was Poitiers at 8 percent. A man walks past a building in central Toulouse. Photo: AFP
So how has Toulouse managed this feat?
The president of the Toulouse region, Jean-Luc Moudenc, pointed out that the city has a strong appeal for people living elsewhere in France.
“Toulouse has had the highest population growth over the past 20 years, taking over from Montpellier,” he told BFM TV.
“Some 80 percent of this growth is from people coming from other regions in France, with around half of them coming from the Paris region.”
“These new arrivals come for highly skilled jobs and the attraction of the ecosystem that we have created here.”
Indeed, Toulouse offers a strong tech scene, is the home of plane manufacturer Airbus where 21,000 people work, and hosts one of France's top universities – the Toulouse School of Economics. Workers at the Airbus assembly line in Toulouse. Photo: AFP
An interactive map on BFM TV showed that while no cities could reach the lofty heights of Toulouse in the decade between 2003 and 2013, many cities recorded a growth in GDP of 25 percent or more.
These included Monpellier at 27.14 percent, Marseille at 25.3, Lyon at 29.9, Nice at 25.7, and Paris at 31.5.
Perhaps another sign Toulouse is on the move is that it is is set to get more regular (and cheap) flights to the UK thanks to Ryanair and Flybe.
Ryanair will see flights to and from Stansted from November, while Flybe will offer daily flights to Manchester and Birmingham for as little as €39 one way.