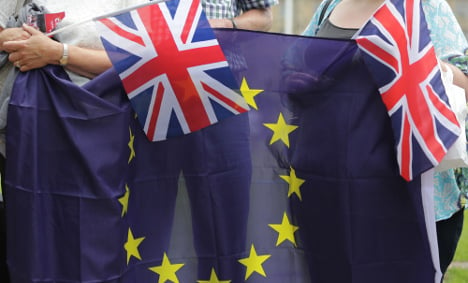 France should halt its contribution to Britain's European Union rebate, the right-wing opposition Republicans party said
Monday, a day after London said it would start Brexit talks early next year.

France should start talks with Brussels to halt next year's contribution to the rebate even though the process of leaving the EU could take up to two years, party spokesman Guillaume Peltier told reporters.

He was reacting to British Prime Minister Theresa May's announcement on Sunday that Britain would trigger Brexit talks by the end of next March.

May “has announced with clarity and precision a timetable for the implementation of Brexit next spring,” he said.

“It seems to us essential that France start a procedure with Brussels saying that from the next budget, the cheque of 1.6 billion euros ($1.8 billion) paid by France each year will not be paid from now on,” he added.

This sum, he explained, was what France paid to the European Union every year as part of its contribution to Britain's EU rebate.

Margaret Thatcher, one of May's predecessors as prime minister, negotiated the rebate in the 1980s. “I want my money back!” she declared in 1980, eventually winning the rebate, worth billions of pounds every year, four years later.

Many observers believe that whoever is eventually chosen as the Republican candidate for next year's presidential election will be well placed to win.