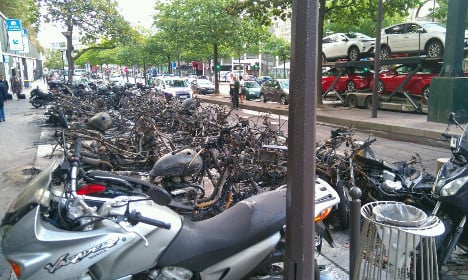 Photo: Twitter/@Serianox_
A car and 52 motorbikes and scooters were torched at around 2.45am in Paris on Saturday, just in front of the Pullman Hotel in Montparnasse.
Almost two dozen firefighters were called out to extinguish the blaze, a job that reportedly took over an hour.
No one was injured in the blaze.
There was also a large police presence called out to the scene.

At present, it remains unknown who was behind the blaze or what their motives were, although a police source told the 20 Minutes newspaper that parts of a smoke bomb were found on the scene.
Some witnesses suggested the smoke bomb had been launched from a nearby bridge, the paper reported.
Police have launched an investigation and are in the process of reviewing CCTV footage.
The torching of bikes and cars is not totally unusual to Paris, especially during demonstrations.