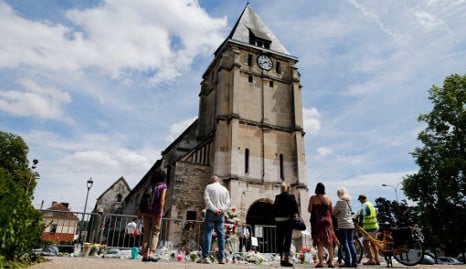 Photo: AFP
The 85-year-old priest had his throat slit at the foot of the altar on July 26th in an attack claimed by Isis.
“He was a good priest. I always went to see him and he never refused to be of service,” said 81-year-old Mafalda Pace, who lives just next door to the 16th-century church.
Pace said Saturday she would be among those following the penitential rite of cleansing and subsequent mass presided over by Archbishop of Rouen Dominique Lebrun.
“The rite consists of 'cleansing' the church through the sprinkling of holy water,” said the archbishop, who also celebrated an August 2nd funeral mass for the slain priest at Rouen Cathedral which was attended by President Francois Hollande and Prime Minister Manuel Valls.
In a show of inter-faith solidarity, Muslims and Jews were among the mourners on that occasion.
Sunday's rite is designed to wipe away the profaning of the church at the hands of jihadists Adel Kermiche, a local man, and Abdel-Malik Petitjean, both of whom were shot dead by police following a siege.
Local clergy will join the archbishop for Sunday's services, which will follow a mid-afternoon procession to the church with members of the local Muslim community pledging to join.
“It will be a day of brotherhood … I hope that all local people will be there, believers or not,” Mohamed Karabila, representing the local mosque, told AFP.
A giant screen has been set up to allow people waxho cannot fit into the church to follow the service outside.
The killing of Father Hamel came less than two weeks after the Bastille Day attack that claimed 86 lives when a Tunisian extremist rammed a truck into crowds on a popular promenade in the southern city of Nice.
The priest's murder and the Nice massacre some seven months after the November Paris attacks were the latest in a series of jihadist attacks to rock France over the past year and a half.
Url copied to clipboard!