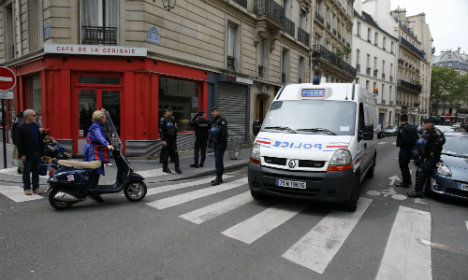 Paris Gendarmes during a previous terror-related arrest in May 2016. File photo: Matthieu Alexandre/AFP
The teenager was charged over criminal associations with a terrorist group, the source said.
The minor had been in contact using Telegram – the encrypted messaging app popular among French radicals – with Rachid Kassim, a French jihadist based in the areas of Syria and Iraq held by the Islamic State group.
The adolescent, who was not previously known to intelligence services, was taken in for questioning early Wednesday from his parents' house in Domont and held in police custody for 48 hours before appearing before the court Friday morning.
“There was a suspicion he was going to commit an act,” said one source close to the investigation, adding that the minor had said while in custody that he had abandoned the plan.
In the last few weeks, around ten adolescents have been held as the authorities scramble to tamp down home-grown jihadist violence that is increasingly drawing in teens.
Kassim, a 29-year-old former social worker from the Loire valley who has appeared in several IS propaganda videos, is believed to have been a key influence on many of the youths.
The 15-year-old charged Friday was “very active on the Telegram messenger, where he liked two stations that broadcast jihadist propaganda”, said a source close to the enquiry.
He was also in contact, using the encrypted messaging service, with another teenager -himself in touch with Kassim – who was arrested on the 14th of September in Paris on suspicion of wanting to commit a violent attack.
Islamic extremists have targeted France repeatedly in the last two years.
French Prime Minister Manuel Valls has said the terror threat was at a “maximum” and that the authorities were foiling attacks and smashing jihadist networks “every day”.
Valls said that around 15,000 people were known to police in France as having been radicalised, up from a previous estimate of 10,000.