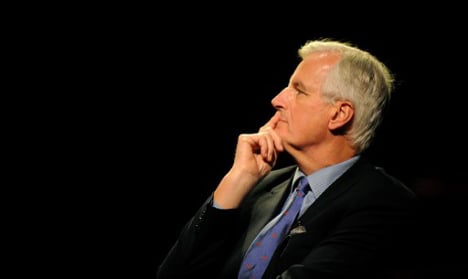 Photo: AFP
Loathed in parts of London for taking on the banking sector when he was a commissioner, Barnier insisted after his appointment by Commission chief Jean-Claude Juncker in July that he will be fair to all sides in what promise to be difficult talks.
The 65-year-old former French minister will begin his job with a grand tour throughout the autumn of the 27 European Union capitals — minus London — to canvass their views on the historic divorce.
“During this first stage he will proceed with a round of consultations with member states,” Juncker's spokesman Margaritis Schinas said on Friday, although Barnier will not speak to the press until November.
Barnier has already visited Berlin for “constructive” talks with foreign minister Frank-Walter Steinmeier on Thursday, and met with Juncker, European Parliament chief Martin Schulz and the parliament's own Brexit pointman Guy Verhofstadt on Tuesday.
But Britain may remain off his itinerary until it formally triggers the two-year separation process from the EU, with the rest of the union insisting there can be “no negotiation without notification”.
'Most dangerous man in Europe'
British Prime Minister Theresa May has kept the rest of the EU guessing as her government tries to work out what it wants in terms of access to the single market and migration, saying she will not trigger the split until 2017 at the earliest.
British newspapers reacted with alarm after Barnier's appointment, given his 2010-14 stint as EU financial services commissioner, which put him at odds with free-wheeling London bankers after the financial crisis.
But both Brussels and London are playing down talk of bad blood.
“At that time I was called the most dangerous man in Europe, and (yet) finally we succeeded to build a clever global financial regulation agenda, with the UK on board,” Barnier told a conference in Brussels on September 7.
“So it's possible, and my line will be… to reach a win-win agreement” for both sides on Brexit.
British officials said they were “relaxed” about his appointment and that contrary to local media reports he was regarded in London as more of a friend to Britain than a foe.
Barnier is also well acquainted with Britain's new Brexit minister, the eurosceptic David Davis, as both were Europe ministers for their respective countries in the 1990s.
Barnier may have informal talks with Britain's ambassador to the EU before any formal meeting with May, European sources said, adding that “exploratory” contacts were a good idea to set the scene for official negotiations.
Turf war
Barnier — who has spent the last two years working on security issues for Juncker as Europe faces a wave of jihadist attacks — will head a “Brexit task force” featuring what Juncker called “the commission's best and brightest”.
His new deputy, Sabine Weyand, is a senior Commission trade official from Germany and is expected to take charge of the nuts and bolts of an eventual deal while Barnier deals with the politics.
But Barnier already finds himself in an EU turf war involving the same issues of national sovereignty that played such a big role in the campaign for Britain's EU referendum in June.
Member states want the talks to be run by the European Council, which groups the 28 EU leaders under former Polish premier Donald Tusk, and not by the European Commission.
But Juncker's Commission, the executive arm of the EU, is pushing to be the main player, and it has the European Parliament's support for that, European sources say.
Parliament meanwhile asserts that it must have the final say on any Brexit deal, as it is the only one of the main three EU institutions that is directly elected by the public.