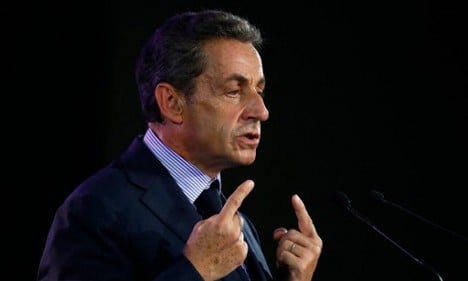 The Libyan claims and revelations in a tell-all book come as polls show Sarkozy failing to close the gap on former premier Alain Juppe, two months before the right holds a primary election to choose its presidential nominee.

Two polls this week showed Juppe, a moderate, extending his lead after a summer spurt by Sarkozy, defeating the ex-president by 57-59 percent to 41-43 percent in the second round of voting among the two top candidates on November 27.

With the ruling Socialists in disarray the primary is seen as a bellwether of the election result.

The winner of the Sarkozy-Juppe duel is forecast to become president, defeating far-right leader Marine Le Pen in the final round of voting on May 7.

Sarkozy entered the campaign under a legal cloud, with several cases hanging over him.

The combative politician has persistently denied any wrongdoing, claiming he is being hounded by the judiciary in a politically-motivated bid to torpedo his comeback.

But his past continues to haunt him.

On Monday, his former domestic intelligence chief Bernard Squarcini was arrested on suspicion of influence peddling.

Nicknamed “The Shark”, Squarcini is suspected of using his police contacts to obtain confidential information about investigations for private clients after he was dismissed as spy chief following Sarkozy's failed 2012 re-election bid.

While Sarkozy is not himself accused in the affair, the case has added to the whiff of scandal engulfing him.

On Tuesday, he was hit by fresh allegations of accepting millions of euros from Kadhafi towards his 2007 presidential campaign.

Sarkozy has rubbished the claims — made by several Kadhafi loyalists — that he was in the pocket of the Libyan leader whom he helped oust during a 2011 NATO-led bombing campaign in which France fired the first shot.

Ghanem, who defected from Kadhafi's regime in 2011, was found dead in 2012 in the Danube river in Vienna.

For Pascal Perrineau, a professor at Sciences Po university in Paris, the growing pile of allegations against Sarkozy could be either a bane or boon to his campaign.

Either “people will say that's enough, there's no smoke without fire,” or
he would succeed in convincing right-wing voters that “everyone is after me”.

The most damaging allegations could be those coming from Patrick Buisson, a historian and former top advisor to Sarkozy who masterminded his controversial sharp shift to the right in the second half of his presidency.

In “The People's Cause: The forbidden story of Sarkozy's presidency” Buisson, who was repudiated by Sarkozy in 2014 for taping him in secret, paints a blistering picture of the ex-leader as a “fake tough guy” with an outsized need to feel loved.

Sarkozy, Buisson wrote, was a “political trader” whose stern rhetoric on immigration and economic reforms masked a “soft hand.”

Buisson also sensationally claimed that his former master ordered police to hang back in 2006 when students demonstrating over labour reforms came under attack.

The book claims the then interior minister Sarkozy told his advisors: “We decided to let groups of blacks and Arabs attack young whites at Invalides (near parliament buildings in Paris).”

For Buisson, the street battles were to Sarkozy what the Battle of Austerlitz was to his hero Napoleon Bonaparte, “his tactical masterpiece”.

The aim, Buisson said, was to give the image of “savage hordes descending on Paris” and helped pave the way for the election of the man who had pledged to cleanse the suburbs of “racaille” (scum).

Buisson also accused Sarkozy of secretly cosying up to the founder of the far-right National Front, Jean-Marie Le Pen during the 2007 election and of defending the FN's values in discussions with advisors as those “of all French people.”

Sarkozy, who won 10,000 euros in damages from Buisson for secretly taping him during his presidency, has refused all comment on the book.