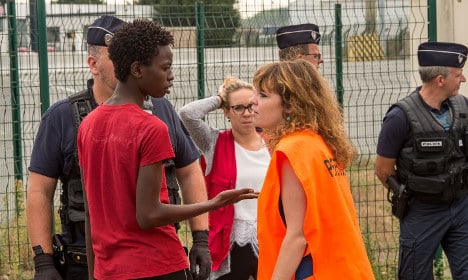 For the cocktail of languages heard on the dirt streets of the Calais “Jungle” take a dollop of Dari, add a pinch of Amharic and Arabic, and sprinkle liberally with Punjabi, Pashto, Kurdish, Tigrinya and Farsi.

The one language rarely heard among the 7,000-10,000 migrants living in the sprawling camp outside the French Channel port is French, though many of the migrants, most of whom have their hearts set on reaching Britain, have a smattering of English.

The French, in turn, have a fraught relationship with the language of their old enemy. The situation makes for sometimes farcical exchanges in the Jungle and highlighting the need for more professional interpreters.

Mariam Guerey, a volunteer with a Catholic charity that works with Calais migrants, was recently asked to use her language skills to help deliver a baby — via mobile phone.

“The hospital called me to help a Sudanese migrant,” she said.

“She was in the middle of a difficult birth so they put the telephone on loudspeaker so I could translate the midwife's instructions.

World in a camp

Medical charity Doctors without Borders (MSF), founded in France, has been assisting people caught up in conflicts and disasters around the world since the 1970s.

But it has never encountered the world in a single camp, said Franck Esnee, the organisation's head of mission in Calais.

“We're used to speaking two languages, maybe three maximum. This is the only crisis where we are asked to help people in four, five, even six languages.”

MSF is one of the only charities operating in the Jungle that has interpreters on its staff.

The six interpreters are themselves all migrants who arrived in France years ago, like 26-year-old Kais Rezai, who made the gruelling journey across the Mediterranean and up through Europe to Calais alone at the age of 13.

Like many of the 900-950 unaccompanied minors living in the Jungle he had hoped to be reunited with family in Britain but Rezai ended up staying in France, where he was placed with a host family and completed his schooling. Nowadays, the young Afghan with the stylish three-day-old beard and perfect French works with other unaccompanied children — his way, he said, of “returning the favour”.

The most important thing for an interpreter, he said, is to win the trust of migrants fearful of deportation “and reassure them that we will not pass on the information they give us to the state or the police.”

Bridging the language and cultural gap between the migrants and those trying to assist them has gained urgency since the French government announced plans to completely dismantle the Jungle's maze of shacks and tents.

On a visit to Calais on Monday, President Francois Hollande said the camp would be razed “by the end of the year” and the occupants moved to refugee centres around the country, where they can apply for asylum.

One of the challenges facing MSF and other charities is to explain to the migrants what to expect when the buses roll up to take them away.

“If we want people to put their trust in the government's plan of action we must be sure they fully understand what is on offer,” Esnee said.

No interpreter, no case

The scarcity of interpreters has repercussions throughout the asylum process.

L'Auberge des Migrants, a migrant support charity, said that refugees who pre-register for asylum in Calais often struggle to tell their story in broken English or French.

Often, volunteers are called on to fill the gaps.

Elias, a student, was the go-between in a standoff between police and a group of Iranian migrants who sewed their mouths shut in protest over the razing of their shacks.

“It was really informal. I was checking on a group of migrants when I was asked by the authorities to try get them to call off their protest.

“So we began discussions and I took over the mediation,” said Elias, who translated between French and English.

In rare cases, the lack of professional interpreters plays in the migrants' favour, namely when a foreigner is accused of a crime.

Expressing frustration, a police source in Calais said the case often has to be dropped because the accused cannot defend himself in his or her native language.

“The migrants are aware of the problem and play on it by claiming they speak a rare dialect for which it is difficult to find an interpreter,” he claimed.