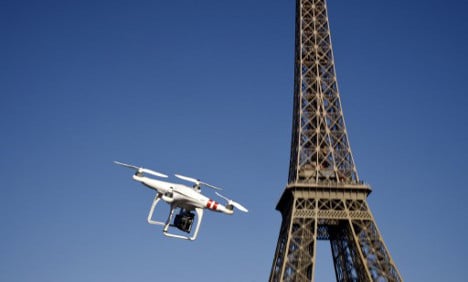 Photo: AFP
A total of 300,000 drones were sold in France last year alone, and authorities are keen to ensure they're used safely.
With this in mind, MPs have voted through a series of new laws that are expected to come into force within weeks.
If the law comes into force those caught flying drones in prohibited areas will face fines of up to €15,000 or up to six months in prison.
It's no surprise that the lawmakers are taking the security angle seriously – in November 2014 French authorities were left concerned after drones were detected flying over various French nuclear power stations and no one was caught.
The lawmakers are also pushing to get any drone over the weight of 800 grammes to be equipped with extra security devices. These would include geo-radars that prevent the drones from flying near restricted areas like nuclear power plants, and sound-emitting devices that would go off if the aircraft were to lose control.
It's estimated that around 10 percent of drones used personally in France are above 800 grammes, and 6 percent are heavier than a kilo.
While the laws are expected to come into force on October 12th, they're not likely to be enforced until 2019 to give owners time to get modifications to their drones. There is also a plan to have every drone officially registered, in a process that would involve owners having to read and be tested on safety rules and regulations.
The proposed laws were welcomed by Michael De Lagarde, president and founder of Toulouse drone producers Delair-Tech, who said the laws “made sense and should curb harmful use”.
“Professional users are aware that an accident could cause serious damage to the those in the business of civilian drones,” he told Le Monde newspaper.
Drones have made headlines in France in recent years, especially after near misses with planes.
In March, an Air France plane reported that it came within a few metres of a drone while coming in for landing at CDG airport in Paris.