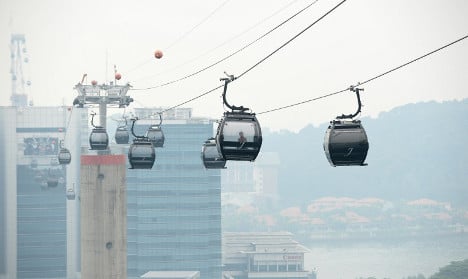 Could something like this be the future of transport in Paris? Photo: AFP
Forget buses and trams, the cable car could be the next big transport step for the Paris region.
At least, that's the new project for Valerie Pécresse, the head of the Ile-de-France region, which includes Paris and its suburbs.
She says that plans for new tramlines in heavily trafficked areas proved to be too expensive and that buses were simply too unreliable when the traffic was bad.
“Cable car transport is clean, quiet, regular in terms of traffic, and costs a lot less than a tramway with just half the time to install,” she told the Journal Du Dimanche newspaper (JDD).
“It also can cross over any obstacles and can carry 5,000 people each way per hour, regardless of what the traffic is doing. What could be better?”
Pécresse has launched a feasibility study into the plan in the hopes of getting the first cable cars up and running by 2021, she told the JDD newspaper.

There are 12 cable projects under consideration at the moment, with plans to go ahead with three by the end of next year. Most of them have been proposed for crossing the Seine River, although mostly outside of central Paris (see map below).

Pécresse said that due to budgetary constraints, however, it wouldn't be possible to introduce them all.
One of the proposed lines in advanced planning stages would run between Villeneuve-Saint-Georges and Pointe du Lac in the southern suburbs of the city.
The journey can take Parisians around 45 minutes each way on the ground in heavy traffic, but would only take an estimated 17 minutes by cable car, reported BFMTV.
Each cable car could carry ten people and would depart every 30 seconds. This would mean 1,800 people per hour, or 14,000 a day – all at a cost of €120 million.
France is no stranger to experimenting with new forms of transport, most recently testing driverless buses in both Lyon (see pic below) and in Paris in recent weeks.