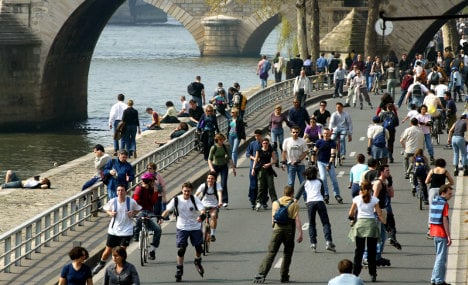 Mayor Anne Hidalgo said the move, which will pedestrianize a 3.3-kilometre (two-mile) stretch of the river's Right Bank, was a “historic decision, the end of an urban motorway and the taking back of the Seine.”

In future the stretch of the river bank between the Tuileries tunnel and the Henry IV tunnel will be closed to the 43,000 vehicles that travel along the route each day.

A definitive decree bringing the move in to law will be taken out in the coming weeks.

The project is a centrepiece of the Socialist mayor's battle against pollution, which has also included banning cars from the Champs-Elysees avenue on the first Sunday of every month.

A centrepiece of Hidalgo's battle against pollution, the plan has divided opinion in the French capital.

“We need to slow down a bit, let go, stop and relax,” said Violetta Kolodziejczak, a restaurant greeter.

“If you're in a car, who has time to appreciate all this?” asked the Polish 56-year-old, sweeping an arm towards the turret-topped stone facades on the riverside, with the Eiffel Tower in the distance. “It's magnificent.”

A recent opinion poll found 55 percent support for the plan among Parisians.

Nearly 19,000 people signed a petition in favour, while a motorists' association gathered 12,000 signatures of members who oppose it.

As expected, left-wing and environmentalist members of the city council approved the plan, while the minority right-wing opposition voted against it.

The decision affects a stretch along the river that has been pedestrianised for a month every summer since 2002, for the hugely popular Paris Plages riverside beach bonanza.

The banks of the Seine, a magnet for lovers as well as tourists thronging to the Notre Dame Cathedral or the Louvre museum, have been classed as a UNESCO World Heritage Site since 1991. This year, the road which cuts across Paris from west to east remained closed to traffic for an exhibition after the sand was cleared away.

The right-dominated greater Paris region has been hostile to the plan, citing fears that bottlenecks on alternative routes will hurt businesses and delay commuters.

Pensioners Veronique Gryson, out walking along the Seine with her husband, said the car ban could be “an expensive privilege” for pedestrians.

“For us, it's very pleasant,” she said. “But during the week if there are 200 pedestrians and at the same time you have 20,000 disgruntled motorists up there (on another road), that might be a problem.”

Opponents have also complained of a lack of consultation and insufficient testing of the plan.

The mayor is determined to fight pollution in a city where air quality regularly violates EU norms, sometimes rivalling that of heavily polluted cities such as Beijing and Shanghai.

Medical experts blame air pollution for 2,500 deaths each year in the city, and 6,600 in the greater Paris area.

To ensure the effectiveness of the road closure, the city plans to monitor traffic on other main arteries, along with noise and emissions levels and the use of the river bank by pedestrians, cyclists and rollerbladers.

Monday's vote comes three and half years after a similar move was made to close part of the left bank of the Seine to traffic.

The road between the Musée d’Orsay and the Pont de L’Alma (Alma Bridge) on the city's famous Rive Gauche was handed over to pedestrians and cyclists by former mayor Bertrand Delanoe.

The tarmac was replaced by around 4.5 hectares of green space, including 1800 square metre floating gardens at a reported cost of €35 million.