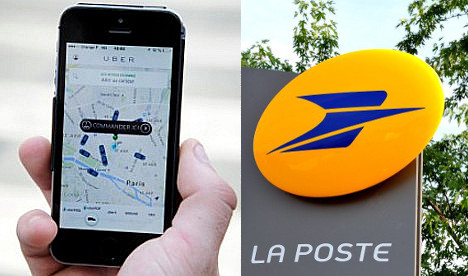 All photos: AFP
I’m about to celebrate fifteen years of living and working in Paris. Not something I thought I’d be writing about when I agreed to come here for three months in 2001.  How three months became fifteen years is a story for another day, but I thought I’d reflect on just what has changed in Paris for the better in that time.
Warning: My view of Paris is not representative of the “real France”, whatever that might be, so I’d like to avoid any brickbats headed my way please.
Here are my five things in Paris which have changed for the better in that time.
La Poste
A trip to my local post office used to fill me with dread. My first local post office was on the Place des Abbesses in Montmartre, where the queue on a Saturday morning would snake around the square and where the simple act of retrieving a “courrier recommandé” meant a lottery, which could mean anything up to an hour lost. In recent years “La Poste” has undergone a miraculous transformation: longer opening hours, automatic franking machines abound, dedicated counters have appeared for retrieving letters and parcels, and even many of the staff seem to have attended reprogramming classes. I say “many”, there are still a few hold-outs who deny my right to use an EU driving license as proof of ID, but keeping a copy of my passport on my phone seems to get round that one.
Some of La Poste’s modernization went a bit too far too fast – for six months they had someone desperately trying to persuade people to try their onsite 3D printer installed at great cost in my local. However, most of the changes have shown just how even the fustiest of French institutions can embrace change.
Oh, and they sponsored the new Star Wars film last year with some incredibly cool designs on vans and postboxes. The old La Poste would never do that. Uber
Can anyone remember life before Uber?
I’ve banished it from my psyche, along with the stress of not knowing how or when I would be able to make it home once the Metro stopped running.  Knowing somebody with a good taxi account number or knowing that fail-safe place to stand to get a cab no longer ranks as an important Paris life skill. Paris’ taxi drivers remain a singularly odious group of misanthropes, but I no longer have any reason to engage with them.
Just for sparing me the regular arguments with “chippy” cab drivers, Uber has immeasurably improved life for me in Paris. Other car services are available of course and I’ll use them too, just not taxis. Sure they’ll make a living for a while yet fleecing tourists and doing cash jobs from the airports, but their own utter disregard for any meaningful modernization has seen them perfectly create the conditions where Uber has flourished.
I believe it is called karma.

Vélibs
Not yet ten years old, and yet it seems like the humble Vélib has been a fixture of Paris life forever. Imitated by cities the world over but never equaled, Paris’ groundbreaking scheme is not just the biggest public bike hire scheme in the world but also the best. Nowhere else do they tolerate whole scale vandalism of bikes with such aplomb.
Nowhere else would continue to grant such massive subsidies to a scheme whose number one users are middle-class, middle-aged men. More Vélibs are vandalized or stolen each year in Paris than in all the years of London’s Boris bike scheme put together. The authorities resist obvious solutions such as more CCTV or punishing offenders, and simply throw more money at the problem. Paris’ largesse is my gain. God bless the Vélibs, I couldn’t possibly love any scheme more. Eurostar
Yes the Eurostar existed in 2001, but it was a different thing entirely from today’s ultra modern two hours and change clip between St Pancras and the Gare du Nord. It used to take nearly four hours, it still had smoking carriages, it went to a crowded corner of an already chaotic Waterloo station and using the buffet car was a necessary and somewhat unpleasant experience. Despite my nostalgia for their microwaved cheeseburger, I don’t miss losing half a day whenever I needed to be in London.
From Paris I can make a morning meeting in the City and be back in the evening more easily, and certainly more comfortably than many colleagues living in the UK, especially those using Southern Rail. It has also meant that London has far more French people than ever before, which means not only is hearing a French voice no longer a novelty, but also that Londoners now look more stylish. Undoubtedly there are more British people in Paris as a result, but Paris has always done a great job of hiding millions of tourists, so I’ve tended not to notice a few more better dressed Brits about the place.

The Smoking Ban
Reeking of stale tobacco smoke and spending far too much money on overpriced dry cleaners as a result, was all part of the charm of a night out in Paris, but I don’t miss it. I remember discussing whether it would work just before it was introduced on February 1st 2007 (which in itself is France at its most brilliant, “we won’t ruin anybody’s New Year’s Eve by making them stub the cigarettes out at midnight, we’ll give the whole country a month’s grace”), and most people I knew were skeptical to say the least.  Parisians, however, immediately fell into line, and thousands of Paris’ bars suddenly became full of air, free of cigarette smoke.
Yes, the air is still full of diesel particulates and a host of other likely pathogens the State is choosing to ignore, but still a great improvement. Doubtless this has also ruined the sleep of thousands of Parisians who live in flats on streets where cackling smokers spill onto the pavement until the wee small hours, but 15 years here has taught me to look out for number one and ignore that part. Martin Dixon is a director of the FBCCI writing in a personal capacity, and his views are personal to him and not representative of any organization with whom he is linked professionally or personally. You can join the debate on the FBCCI Linkedin group here .