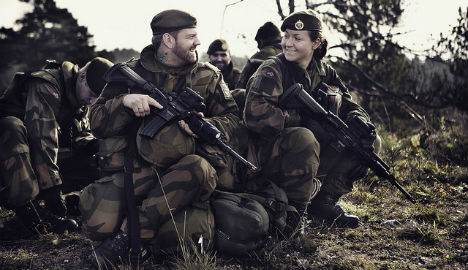 The HK 416 F weapon is used by the Norwegian armed forces. Photo: Norwegian home guard
Heckler und Koch will provide French troops with its HK 416 F model from 2017 under a 10-year supply contract, the DGA said. Press reports put the value of the deal at around 300 million euros ($337
million).
“The contract contributes to the further strengthening of the solid ties between Germany and France in defence and in the armaments industry in particular,” the DGA said.
The HK 416 F won against four other proposals after bidding was opened across Europe, it said.  The contract provides for the supply of 100,000 weapons, accessories and ammunition, as well as training.
Heckler und Koch have already manufactured 60,000 of the weapons, mainly for the Norwegian armed forces.
The model, which has a rate of fire of up to 900 rounds per minute and an effective firing range of 300 metres (1,000 feet), is already in use with the French air force and special forces.
The FAMAS — the acronym for 'Fusil d'Assaut de la Manufacture d'Armes de Saint-Etienne' — was designed more than four decades ago.
The four other assault rifles competing with the HK 416 F were the ARX160, made by Beretta of Italy; the MCX, manufactured by the German-Swiss firm Sig Sauer; the VHS2, made by the Croatian firm HS Produkt; and the SCAR, manufactured by Belgium's FN Herstal.