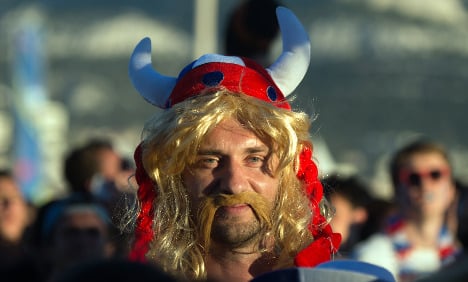 Immigrants granted citizenship in France must accept that their “ancestors are Gauls”, who inhabited the territory now known as France during the Iron Age and Roman period.

The man vying for France’s top job once again did not explain how exactly immigrants would be forced to accept their “Gaulois” ancestry. Possibly by swearing on a copy of an Asterix comic book?

But while his words were clearly part of his ongoing to campaign to convince voters, especially those on the far right, that he represents the real France, the comments prompted ire and ridicule among many.

Sarkozy, himself the son of a Hungarian aristocrat, was dubbed Sarkozix, in reference to the Asterix comic books that feature the village of Gauls fighting against the Romans.

Pictures were mocked up to transform the ex-president into a Gaul warrior and politicians happily jumped on the bandwagon.

#Sarkozy's efforts to collect #FN votes by focusing on #identity taken to another level:when you become #French your ancestors are #Gaulois pic.twitter.com/KIxILxZwuZ

“I also love Asterix but fortunately, France is a much broader concept than that particularly narrow vision,” said labour minister Myriam El-Khomri.

It was left to historians, politicians and newspaper editors to put Sarkozy right.

Laurent Joffrin, the editor of left wing Liberation newspaper said Sarkozy's comments were comic because: “Every serious historian knows that the Gauls are not 'our ancestors', but only our distant predecessors in the present territory of France”.

One of those serious historians Benjamin Stora said: “Yes the Gauls are ancestors, but they are not the only ancestors of the French.”

“The word Gaul is a Roman invention which was used to designate certain areas,” he said. “Republican historians have shaped the representation of the Gauls as those resisting an invader, and it has been magnified.

“So it’s a fabrication, but then again what isn’t?” the historian added.

Another historian Mathilde Larrére was furious and gave Sarkozy a history lesson in around 30 tweets.

“At the beginning Gaul was a Roman invention to designate a certain people who actually had little in common,” she told BFM TV.

“The Gauls did not exist as such by themselves. It was Caesar who called them that. It was a group of people who occasionally united, who would believe in the same gods, who had druids, but they didn’t represent a homogenous group,” she added.

Larrere added that the Germanic origins of the people of Alsace-Lorraine in the east, which was part of Germany from 1871 to the end of WW1, and the interbreeding during French colonization were just two reasons to complicate Sarkozy’s view of the past.

Another historian Dimitri Casali said the Gauls were the “base of the French population because there were around eight to nine million around the time of Vercingetorix”, the king and chieftain who united the Gauls in revolt against Roman forces.

Casali said it would be more accurate to talk of “Gallo-Romans” because there were “successive waves of invasions and migrations”.

France’s own minister of education Najat- Vallaud-Belkacem weighed into the row and suggested Sarkozy was in need of a history lesson.

She pointed out the reality of the origins of the French population today.

“Yes, among our ancestors there are the Gauls, but there are also Romans, Normans, Celts, Burgundians,” she said.

“And in case he had forgotten, with time France has annexed other territories. The Niçois have joined us, the Corsicans, those in Franche-Comté, Guadeloupe, Martinique and then there’s the Arabs, the Italians and the Spanish.

“That’s what France is.”

Then there’s the Bretons, who mostly heralded from Celts who migrated from Great Britain, the Normans who came from the Vikings and the indigenous Basques in the south west of France.

And the Franks, the Germanic tribes that conquered much of French territory and gave the country it's name.

“And those from the Antilles and Guyana are French through ten generations but their ancestors are not really the Gauls,” tweeted historian and writer Claude Ribbe.

One historian Suzanne Citron was not surprised that Sarkozy might have uttered such a statement given that in one of the most important school history textbooks used in the past are the words: “In the past, our country was called Gaul and its inhabitants, the Gauls”.

Citron says the “fantastical” idea of a pure ethnic Gallic race being the founders of the true French is damaging as it “denies the racial and cultural diversity that constantly accompanied the historical creation of France.”