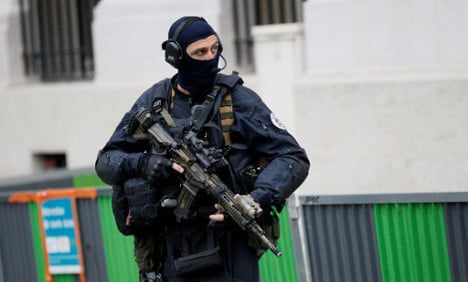 Photo: AFP
The teens, aged 14 and 16, are suspected of calling in a fake hostage situation in central Paris on Saturday that saw a mass police deployment and panic on the streets.
They have now been hit with preliminary charges of  “reporting imaginary crimes”, “divulging false information with the intention of making people believe there was a terror attack” and the “identity theft”.
The 16-year-old, named as Dylan by the French media, confessed to being behind the false alarm after he was arrested on Monday.
The 14-year-old, who was arrested on Tuesday, remains under police interrogation.
Both boys have been remanded in a secure “educational centre” for youths.
It's understood they hacked the telephone line of the Saint-Leu-Saint Gilles church in the 1st arrondissement, telling police there was an ongoing hostage situation inside. The boys risk up to two years in prison and a fine of up to €30,000 on charges of reporting an imaginary crime.
But on top of this, the trio face the wrath of the French government.
A statement from Interior Minister Bernard Cazeneuve said the government would seek compensation as a civil party, essentially meaning it plans to charge the three for dispatching police for no reason.
“With France confronted by a highly elevated terror threat, it is intolerable to sow the seed of anxiety among people and to force the mobilization of significant resources in vain,” he said.
He added that there was no reason taxpayers should have to cough up for the “unnecessary expenditure of public funds”.
It remains unknown what this could mean in terms of a tangible fine for the boys, if they are found guilty, but police are not trying to put together the bill of sending out 100 officers, not to mention the dispatch of the elite counter-terrorist unit trained to intervene in hostage situations.
And there is a good chance the judges won't be lenient on the Paris teens, not least after a teen claiming to be behind the prank bragged about it to the French media just days later.
“We did not think it would work. We just did it for the thrill and to become known,” a person claiming to be behind the hoax told BFM TV.

“If people panic then that’s their fault.”
It remains unknown at this point if the boys arrested this week are the same teens who spoke to the media.
But even so, the court may want to make an example of them in the hopes of deterring others from doing the same.
Saturday's hoax in Paris forced the central part of the city to go into lock-down and caused hundreds of shoppers to flee in panic.
The government even issued an alert on its smartphone app designed to warn the public of a terror attack telling them to avoid central Paris and seek shelter.
And with France on high alert after a string of terror attacks, it’s perhaps no surprise the police reacted in the way they did.