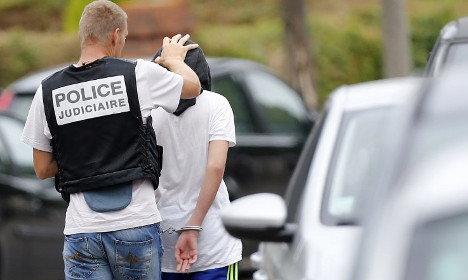 File Photo of a man suspected of having links to the murder of a French priest being arrested. Photo: AFP

Guy Lefranc, mayor of Evreux in Normandy, has come up with a radical suggestion for what to do with all the radicalized individuals who may pose a threat to the town’s residents.

Lefranc has demanded all those on France's “Fiche S” list, meaning they have been flagged up as a potential danger to the national security, simply be expelled.

“I am furious,” said mayor Lefranc, after having his request to have a list of the potential dangerous individuals in his town turned down.

“Given that the state does not give us the means to protect the people of Evreux, I demand the state expels all those who are “Fiche S”,” he said. “I feel compelled to ask for this expulsion because I am not entitled to a perfectly legitimate request to know all those who are ‘Fiche S’,” he said.

Given that we are in a state of emergency it is the responsibility of the Prime Minister to issue a decree… that would give local mayors access to the files,” he said. (The Town Hall at Evreux. AFP)

The mayor had told the local prefect that the safety of the town was at stake and felt him having knowledge of those who were radicalised would make security more effective.

But it was turned down.

Many, but by no means all of the jihadists who have launched attacks in France had existing “Fiche S” files, meaning their potential threat was known to authorities.

The fact that there are believed to be over 10,000 individuals in France with “Fiche S” files for various reasons, not just those who are radicalized or potential jihadists, has presented enormous problems for authorities.

Anger, frustration and fear are clearly growing, especially after the slaying of a French priest at a church in Normandy, by two jihadists known to authorities.

The mayor of Evreux would have only felt more aggrieved this week when it was reported that an individual flagged up as “Fiche S” was arrested in nearby Rouen after raising suspicions by walking into the university and acting suspiciously.

Presidential candidate Nicolas Sarkozy said last year he favours putting anyone with a “Fiche S” file on house arrest and assigning them with an electronic tag, so their whereabouts can be known at all times. He has since gone even further and put forward the idea of locking them all up.

While there have been calls for a French Guantanamo to be built to house all terror suspects, the government has resisted on the grounds it would be contrary to human rights.