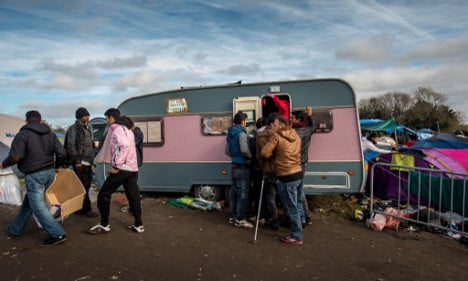 Photos: AFP
The allegations came via a Facebook group for Calais volunteers, when a man brought up the issue of the sexual relationships in the camp and prompted a debate, reported British newspaper The Independent.
It appears the issue of volunteers sleeping with refugees is well-known in the community, and that relationships are most often between female volunteers and male refugees.
The original poster noted that he had even heard of “boys, believed to be under the age of consent, having sex with volunteers”.
“I have heard of volunteers having sex with multiple partners in one day,” he added. Several heads of Calais charities confirmed to the paper that they were aware of the sexual relationships between volunteers and refugees.
The issue is a contentious one, as some volunteers see it as a natural occurrence given the circumstances, while others argue it's an exploitation of power.
The UNHCR called for charities in Calais to adopt a zero tolerance approach to sexual relationships with migrants after learning of the issue, and has always said that sexual relations between aid staff and beneficiaries should be “strongly discouraged”.
In Calais, however, it's an extremely tough situation to monitor, not least because so many volunteers aren't affiliated with any charity group. The problem is exacerbated due to the fact there are no universal humanitarian standards in the camp, meaning essentially that anyone who wants to can come into the camp to help.
Some charity heads told the paper that they had kicked out volunteers upon learning of the sexual exploits with migrants.
The Facebook thread that raised the issue of sexual exploitation was deleted hours after users called for its removal, fearing that it would become a scandal if journalists were to see it, The Independent reported.
The Calais Jungle is bursting at the seams as more migrants arrive, many hoping to make their way to the UK.
In the most recent move to keep Calais migrants from getting there, construction has started on a wall that will run along the main road leading to the city's port. The British-funded wall, dubbed the “Great Wall of Calais”, is set to be one kilometre long and four metres high.
Its population is estimated by charities to be at around 10,000, though authorities put an official August cout at 6,900.
Migrants from Sudan make up the largest group at 43 percent, according to L'Auberge des Migrants and the British non-governmental organisation Help Refugees, while 33 percent are from Afghanistan.
Around nine percent are Eritreans and seven percent are Pakistanis.