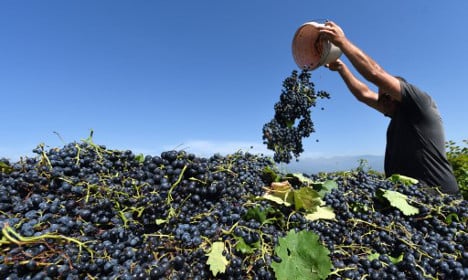 All photos: AFP
A back-breaking and enduring job, grape picking certainly isn't for the faint of heart.
But each year, thousands travel across France to spend the days picking and sorting the fruits of the harvest.
And while it's no walk in the park, the job enjoys a great reputation and sees many people making their way back to the vineyards each year for this convivial experience.
Here are some things you might not have known about France's harvest.
Wine-growers have to wait for the green light
The official date of the beginning of the harvest is set by the local préfecture. They give their authorisation to lift the ban (known as “le lever du ban”) which is in place throughout the rest of the year and forbids grape-picking.
In some towns, such as Avignon in the south, celebrations take place to mark the beginning of this busy period.
100 day countdown
From when the first blossoms emerge to the harvesting of the grapes takes 100 days. However, the dates vary from one region to another depending on the weather. This means that the vendanges (grape harvests) begin in Corsica and southern France, before making their way up north.
The grapes have the last word
Different factors come into play when deciding when the time is exactly right to harvest. On one side, wine growers meticulously determine the levels of sugar and acidity inside the grapes. The amount of tannins also have an important role, particularly for red wine. Powerful anti-oxidants found in the skin and the seeds, these tannins affect the mouthfeel and extend the lifespan of the wine.
300,000 people take part each year
It's open to anyone above the age of 16 and applications go through the government's employment centre, Pôle-Emploi, but if you can brave it and call-up the property it might be rewarding.
A popular seasonal job, it brings together people from all ages – from students to workers, some people even take holiday time off work to participate. Most vineyards pay minimum wages, known as SMIC in France.
Arduous hand-picking
It takes 8 to 15 days to complete the harvest by hand. Of course, this depends on the size of the vineyard and on the workforce. One worker = One tonne of grapes
When hand-picked, a person can vendange (to grape-harvest) about one tonne of grapes in a day. However, machines are increasingly popular and can harvest up to 200 tonnes in a day. They also have the advantage of being able to run 24 hours a day and therefore help to avoid bad weather conditions.
Machines can't do it all
On top of being less accurate than handworkers, machines have to sort the grapes they collect later on, instead of on the spot. Pickers remove unwanted grapes, either because they're too small, unripe or mouldy. Certain places must by law pick by hands, including at areas that are legally defined by their location, such as Champagne.
2016 will be slim pickings (but good ones)
Vintners everywhere are thanking a dry, hot summer for “lovely, healthy grapes”, said Jerome Despey, who heads the wine division of agriculture ministry offshoot FranceAgriMer.
“Overall, we are going to see wines of great quality,” he said.
However, output will be down because of freezing episodes and hailstorms in the spring, especially in Champagne, Burgundy and the Loire Valley, Despey said, predicting “one of the smallest harvests since that of 1993”.
Late last month the government forecast a 10 percent drop in wine production compared with 2015, to 42.9 million hectolitres.
The Bordeaux, Alsace and Beaujolais regions were largely spared the ravages of the spring and are expected to match or exceed last year's output.
Even within regions some vineyards fared better than others, such as in Champagne where mildew and a fungal disease, esca, added to the weather woes.
How many grapes in a bottle of wine?
For a 75cl bottle of wine you will need one kilo of grapes, which equates to approximately 220 grapes depending on the variety (known as the cépage).
The month of “vendémiaire”
… was the first month of the Republican calendar in place during the French Revolution. Depending on the year, vendémiaire went from 22nd September to 21st October and stood out as the time in which the grapes would be harvested.
By James Vasina