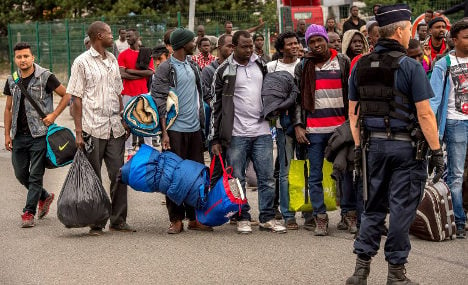 The squalid migrant camp known as the “Jungle” in France's northern port of Calais has become home to nearly 1,000
more people since August, bringing the total to more than 10,000, two charities working there said Monday.

“The total number of people is 10,088. The previous count was 9,106, making it an increase of 12 percent in a month,” according to the French association L'Auberge des Migrants and the British non-governmental organisation Help Refugees.

The latest figures include migrants sleeping in tents and those staying at provisional welcome centres, the charities said.

The figures from the groups working at the Jungle are disputed by French authorities, who according to the last official count on August 19 put the number of migrants at 6,900.

Most of the people in the Jungle are men trying to find a way to cross the Channel and clandestinely enter Britain, however aid agencies report that a growing number now want to stay in France and remain in the Jungle while their asylum applications are processed. The charities said their count was conducted from September 10 to 12, and included the nationalities of the migrants.

Forty-three percent were Sudanese, 33 percent Afghans, 9.0 percent Eritreans, 7.0 percent Pakistanis, 3.5 percent Ethiopians, and Iraqis and Syrians were at 1.0 percent each.

They counted 1,179 minors, over 300 more than in August, and most of them were unaccompanied minors, with the youngest just eight years old.

French interior minister Bernard Cazeneuve has pledged to dismantle the Jungle camp in stages and rehouse the inhabitants elsewhere.

The British government meanwhile has announced plans to build a wall in Calais to stop migrants from jumping on lorries heading to Britain.