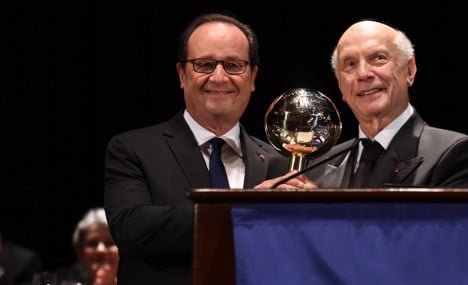 The beleaguered François Hollande must know there's nothing much he can do now to arrest his slide.

On Monday he was awarded with the honour of being named “World Statesman of the Year” during a trip to New York.

The award sounded grand and prestigious but by Tuesday it became clear that the French public cared little.

The latest poll showed his popularity ratings had tumbled again  – only 16 percent see him as “a good president”, with just over seven months before the next presidential election. Hollande has still not declared whether he will run.

Opinion polls and predictions suggest it would be futile.

Hollande however has grown used to appalling ratings over the years and he wasn’t going to let it spoil his big night at the chic Waldorf Astoria Hotel in New York.

Although the World Statesman of the Year award sounds grand and highly prestigious, there is a certain amount of skepticism around it, not least in France, where any opportunity to knock Hollande is gleefully taken.

It was handed out by the Appeal of Conscience foundation, an American “inter-faith” organisation that backs “freedom of worship, human rights and tolerance”.

It was founded in 1965 by Arthur Schneier, a rabbi who survived the Holocaust.

The organisation aims to honour “leaders who support peace and freedom, for the promotion of tolerance, human dignity and human rights”.

Hollande was recognised by the foundation for his “leadership in safeguarding democracy and freedom in a time of terrorist attacks and for its contribution to global stability and security”.

While Hollande’s approval scores have suffered due to his failure to kick start France’s economy, he has seen a jump in ratings after each terror attack, with the public appearing to appreciate his tough yet unifying response.

But could the award be something of a curse for its recipients?

Hollande’s sworn adversary Nicolas Sarkozy picked up the prize in 2008 and he was kicked out of power a few years later.

And former UK Prime Minister David Cameron received the award only last year, before his political career ended in tatters following his failure to convince the UK to stay in the EU.

Cameron has since quit as Prime Minister and MP.

Hollande must be fearing the worst with all opinion polls suggesting he too will soon have to relinquish the reigns of power.