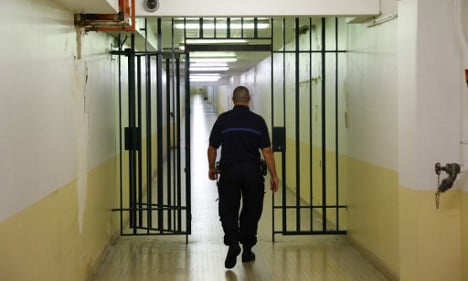 Photo: AFP
In a report presented on Tuesday, he said the plan would cost €1.1 billion and should be put into place in 2017.
The construction of the extra cells, he estimated, would be completed in 2025.
He envisaged 80 percent of the new spots to be single cells, with up to 1,500 to be built for two inmates.
The minister's plans echo those of Prime Minister Manuel Valls who said earlier this month that France's overcrowded prisons could use an extra 10,000 places, not least considering the fact that authorities are closely watching some 15,000 potential terror suspects.
France’s prisons system is in crisis due to the fact that it has more inmates in its jails than ever before. In July authorities counted 69,375 prisoners compared to 58,311 official places available in the country’s 188 prisons.
Though while authorities are calling for more prison spots, some say the best solution lies elsewhere.

François Bes from the International Prison Observatory (OIP) believes young offenders should be sentenced to work or training to help get them back on the right path. He said in August that punishments that benefit the public could be handed out to those who damage property.

He pointed out that it costs France €100 a day per prisoner to lock them up, but for those who serve sentences without going to prison it's €40.