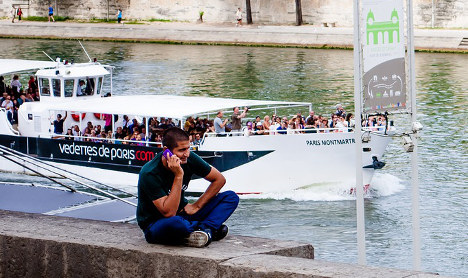 Photo: Pixabay
“Welcome to the French number. You're about to be connected to a random French person,” an automated voice says, moments before somewhere in France, a random French person will (probably) start talking to you.
“I'm a random French person,” confirms Guillaume from the 10th arrondissement of Paris, the first person The Local caught on Monday.
“I like foie gras and truffles and I eat in a restaurant everyday. I can't cook either.”
Guillaume is one of the 1,500 volunteers working for the French number, a concept aimed at promoting France to tourists by connecting them to what the company calls “a random French”, (presumably after having translated français to just “French” rather than “French person” or even “Frenchy”. Maybe purposefully.)
He was one of the many to offer a friendly word about France, its food, or its best hidden holiday getaways – and all in English.
One of the random French people at the other end of the line even kindly offered his private phone number in case any further questions cropped up. One of the questions they may get a lot is if France is safe right now, or at least that's one of the questions The Local France is frequently asked by potential visitors.
And all were quick to brush away any kind of terror concerns.
“We have a proverb in France,” said French-Moroccan Abde.
“A fallen tree makes more noise than the sound of an entire forest growing. It's the same with the terror attacks. Constantly talking about it just gives it more importance.”
Another said that a terror attack was like a hurricane – “it shouldn't put you off visiting an entire country”.
Whether it's to allay fears it seems most of the French who signed up as volunteers want to give the truth about France and dispel any misconceptions people might have.
Frenchwoman Marie, in Bordeaux, said she signed up to the app to help amend what she considered to be a bad reputation among the French.
“I want to help improve the French reputation, there's this thought that we are all rude and angry, and that's definitely not the case,” she said.
She also recommended that the best place to meet French friends is via social media networks, especially Tinder.
“Tinder is a social media channel in France like any other, just set your profile to say you're only looking for friends and you'll find them,” she said. Photo: Kaboompics
And as the phone number is linked to tourist chiefs Atout France, it was no surprise  that volunteers were quick to offer tips for the hidden treasures of France for tourists, including the pristine waters of alpine town Annecy in the Alps, the village of Saint Paul de Vence in the south, and the sandy beaches of Cabourg in Normandy.
But the tourist connection doesn't mean the people you speak to will necessarily be the shining ambassador for France you had imagined.
When asked for a hidden gem in France for a weekend getaway, a man in Valenciennes, northern France, suggested crossing the border and getting out.
“I would actually go to Belgium. And Brussels is better than Paris anyway, there are fewer tourists,” he said.
One Parisian we spoke to suggested the French are less friendly due to the terror attacks and that France “is boring compared to the UK.”
“It isn't as vibrant so it's best to come as a couple or with some friends,” he advised us.
Indeed, the French Number is still in its early stages, and not all the 1,500 volunteers appear to be on board just yet.
Many seemed surprised when answering and many calls went through to voice mails, presumably because volunteers were at work.
One call went to a less-than-impressed Frenchman.
When told we were calling for information about Paris, he said “Yeah, and…?” before eventually hanging up.
It was a pleasure, however, to talk to the others.