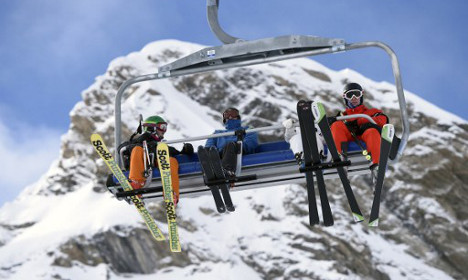 Tourists take a ski lift in the French ski resort of Val d'Isère in the French Alps. Photo: AFP
The popularity of France's ski slopes has gone downhill, ever so slightly.
France's ski slopes were frequented three percent less over the winter compared to the year before, recording 52 million 'skier days' in the winter of 2015/2016.
The US, meanwhile, enjoyed a 0.6 percent hike in their season's statistics, for a total of 53.9 million 'skier days'.
France and the US have traded the top spot in recent years, with France finishing at the top of the podium in four winters from the past eight. Before that, the US was always on top.
France's statistics came courtesy of the DFS (Domaines Skiables de France) an organisation representing the French ski industry.
A spokesperson blamed the visitor slump on the weather.
“There was a very difficult start to the season due to a lack of snow at low and medium altitudes, not to mention unpredictable weather causing disruptions to our operating systems,” the DFS said in a statement.
Numbers were also down in Europe's number two destination for skiing, Austria, which finished the season with 49.9 million 'skier days', a 4 percent drop from the previous winter.
France reached peak attendance on the ski slopes in 2008/2009 when it recorded 58.9 million 'skier days', some 11.7 percent more than last season.