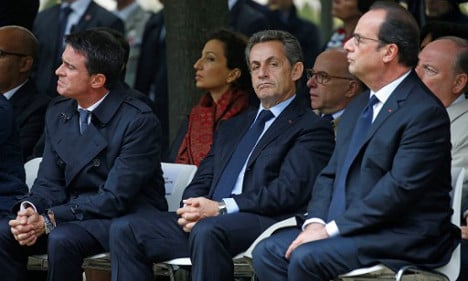 French Prime Minister Manuel Valls (left), former French President Nicolas Sarkozy (centre) and French President Francois Hollande (right). Photo: AFP
The annual ceremony, which was first held in 1989, allows families, those injured during attacks, and politicians to pay their respects to the France's victims of terror.
And the past 12 months have proven to be devastating for France, with 238 people losing their lives to terrorists since last January 2015.
This included 86 at the Bastille Day attack in Nice, and 130 in a series of attacks in Paris on November 13th last year.
President Francois Hollande said that it was the responsibility of France “to answer all the questions” when it came to terrorism.
“Nothing is as it was before, and nothing can be as it was before,” he said.
“Terrorism has changed dimension, it has declared war on us. Each of these attacks is different in its horror, but they all have the same people behind them and the same goal: to use Islam, dishonour, and fear mongering to harm our democracy and our culture.”
Hollande added that there will be reforms to system for giving compensation to the families of terror victims in France. Members of the Charrihi family, victims of the terror attack in Nice, arrive at the Hotel des Invalides. Photo: AFP
The ceremony was held at the Hotes des Invalides, the gilded 17th-century complex in central Paris that houses a military hospital and museum and Napoleon's tomb.
It is the same place where President Hollande led a similar tribute for the victims of the November attacks in Paris.
The date of Monday's ceremony – September 19th – marks the anniversary of a 1989 terror attack on a plane flying from Brazzaville in the People's Republic of the Congo to Paris, in which 54 French people were killed.
Monday's ceremony was attended by Nicolas Sarkozy and Alain Juppe, both of whom have their sights on France's presidency next year. France will see a general election in April and May with terrorism a key issue on both sides of the political spectrum. The tribute is being held at the Invalides in Paris. Photo: AFP