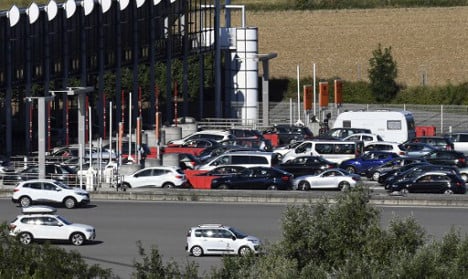 Photo: AFP
France's motorways are soon to be improved, and you're going to pay for it, bit by bit.
This was the message from Transport Minister Alain Vidalies, who announced on Sunday that he had got the green light from President Francois Hollande to roll out a €1 billion project to improve the country's roadways.
The increased toll fees will be rolled out over three years, from 2018 to 2020, and will see toll fees rise between 0.3 and 0.4 percent.
Vidalies told the Journal du Dimanche newspaper that there was a scheduled list of 30 developments, including everything from environmental improvements to creating noise barriers, car-sharing options, and “eco-bridges” for animals to safely cross roads.

Work is scheduled to begin at the end of next year.
Roadworks will be carried out across the entire country, according to a map published in JDD (see below), but the highways in the northwest and east will get particular attention.
These improvements will be funded by local authorities, as well as through the increased road tolls.
Vidalies told the paper that the changes would create 5,000 new jobs.