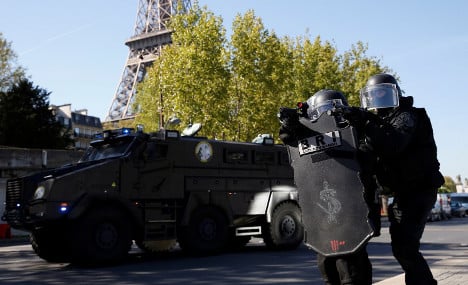 Two teenagers have bragged to French media about how they forced central Paris to go into lock-down on Saturday and cause hundreds to flee in fear.

The pair, aged 16 and 17, described as “hackers” in the French press, have told media they were behind the hoax call to police on Saturday that claimed there was a hostage situation at a church in the Châtelet area of central Paris.

The call prompted scores of armed police to descend on the busy area and the elite counter-terrorist unit trained to intervene in hostage situations was dispatched.

Shoppers fled in panic and stores pulled down their shutters on the orders of police as Paris feared it was once again being targeted by terrorists.

The government even issued an alert on its smartphone app designed to warn the public of a terror attack telling them to avoid central Paris and seek shelter.

But it turned out to be a false alarm and police opened an investigation into the “reporting of an imaginary crime”, which could be punished by up to two years in prison and a €30,000 fine.

On Sunday afternoon the teenage hackers claimed on a Facebook page to be behind the fake call and told French media it wasn't their problem if people were scared.

“We said there had been hostages taken in the church and that there were ten North Africans with arms and suicide belts” one of them told BFM TV.

“We did not think it would work. We just did it for the thrill and to become known,” the hacker added.

“If people panic then that’s their fault.”

The pair released audio tapes of their conversations with police in which an officer can be heard telling them that they receive many fake calls and asking them to verify information around the positions of the hostages.

The pair said they got their inspiration from the US phenomenon known as “swatting”, in which fake calls are made to deceive emergency services in the hope that authorities deploy the specialist Swat teams.

“I did the worst 'Swatt', I got them to send out a helicopter, the government, 50 police cars, I was top trend on Twitter,” said one of the hackers on Facebook.

With France on high alert after a string of terror attacks, it’s perhaps no surprise the police reacted in the way they did.

As for the hackers, they told the Nouvel Observateur site that they are completely confident they won’t be caught.

“We aren’t traceable. We use encrypted servers. We are at least two hours away from Paris and we aren’t afraid of the police,” they said.

However they're bragging may have been misplaced with reports in French media on Monday afternoon that one teenagers named Dylan, had been arrested.

Earlier a police source had told AFP that it could take a long time to track down those responsible for Saturday’s fake alert.

“They are even more so given the current terror threat – to knowingly take the risk of diverting security forces and emergency services from genuine emergencies,” he added.