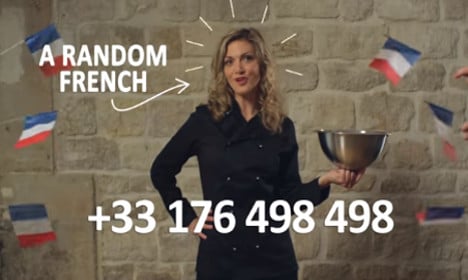 Photo: The French number
“Hello, bonjour, France speaking!”
“It's not a joke. It's for real…” promises the very French woman in the advert. “It's the first phone number that connects anyone in the world with France.”
The French Number, as the initiative has been called, follows a similar service launched in Sweden earlier this year.
The idea is that for the price of an international call, people from a selection of 100 countries can “dial France” using the same number – +33 176 498 498 – and they will get connected via a switchboard to a random French volunteer somewhere in France.
“Dial the number and in a matter of minutes, you'll actually be talking to a “f**king French”,” she says, before excusing herself with a “pardon my French”.
And then it's up to you as a tourist to find out more. A restaurant recommendation? A place to get a view in Paris? Where to go for a weekend? Should I really eat snails?
Those authentic French people on the other end of the line will be hopefully be able to help you.
“The French people registered on The French Number will help you discover not only France, but also their France,” promise the group behind the number, start-up Caladrius Media SAS, which is linked to the Atout France tourism board.
The group sad that the idea was to use a voice-to-voice platform to allow France's 85 million tourists a year to “enjoy a more cordial experience with our country through direct contact with French people”.
“Gone are the days of reading tourist guides or boring articles, now you can simply ask a true French,” the French woman in the video promises.
“There's no better way to learn about France than to ask a French,” she says.
And she recommends that all topics can be broached, including the food, the haute couture, the cheese and wine, getting tips for weekend getaways, practicing your French, and even how to catch the eye of a French person.
The number was quietly launched in June as organizers recruited a team of 1,500 volunteers (who all say they can speak English), and the product was officially launched on Friday.
And people have already phoned in from 28 different countries, including Japan, Australia, and the US.
Organizers said they're hoping the scheme will take off to such an extent that 80,000 eager tourists will be calling by December.
France has suffered from a dramatic fall in tourist numbers after a spate of terror attacks, so perhaps the authorities are hoping the French people themselves can be the ones to entice them back.
The Local France tested the service and got some interesting answers to our questions.