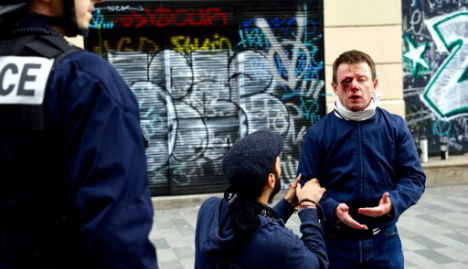 Laurent Theron is comforted by a colleague after his eyeball was burst during the protest. Photo: Greg Sandoval / AFP
“I am going to file an official complaint myself. I will do everything to ensure justice is done,” Laurent Theron, 46, told the BFM television news network.
The Solidaires union said in a statement that Theron had “apparently been struck by a fragment of a (tear gas) grenade fired by police.”
“Unfortunately, despite the care he received in hospital he lost the use of his eye,” the union said, adding that “nothing justified the use of force” against Theron.
The statement said that Theron had been talking with colleagues in Paris' Place de la Republique towards the end of the demonstration and that nothing in the vicinity posed a threat to the police.
The police “nevertheless charged with massive use of tear gas and stun grenades.”
Thursday saw the latest in a series of demonstrations held to protest a law, forced through in July, that loosens France's notoriously rigid employment legislation.
Across the country, tens of thousands took to the streets. At least four demonstrators and 15 police were hurt — including two officers who sustained burns due to Molotov cocktails.
Police said an investigation had been opened into the circumstances that led to Theron's injury.
“I had my hand in my pockets. According to the surgeon who operated on me, the projectile was fired directly at me from close by,” newspaper Le Monde's website quoted him as saying. “My eye burst from the force of it,” he said
Url copied to clipboard!