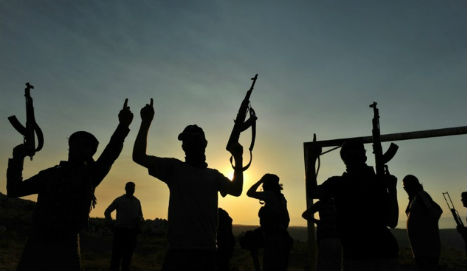 Jihadis in Syria. Photo: Bulent Kilic/AFP
The 40-year-old Al-Nusra Front militant, who also uses the name Omar Omsen, became notorious last year for faking his own death in order to leave Syria for surgery.
According to the designation, Diaby leads a group of 50 French volunteers who traveled to Syria and signed up with the Al-Nusra Front, Al-Qaeda's franchise in the region.
Nusra says it broke with Al-Qaeda in July and has rebranded itself Jabhat Fateh al-Sham.
“Although assumed killed in August 2015, Diaby re-emerged in May 2016, claiming his death was a ploy to allow him to travel to Turkey for an operation,” the designation said.
“Diaby came to the attention of French intelligence due to his involvement with a French extremist group and his online propaganda video series,” it added. “Diaby's videos have been credited as the chief reason behind why so many French nationals have joined militant groups in Syria and Iraq.”
Diaby's parents reported him dead last year but in May he surfaced again, giving an interview by Skype to France 2 television to explain he had traveled for surgery.
France 2 also broadcast footage of a training camp in western Syria housing around 30 young French jihadists, many of them from Diaby's home region near Nice.
While Diaby had not then been directly linked to attacks in France, he has expressed approval for the January 2015 shootings at the satirical newspaper Charlie Hebdo.
“I wish I'd been chosen to do that,” he told France 2.
And Diaby — or “Emir Omar Omsen” — has been in the crosshairs of French intelligence for some time. He was a member of Forsane Alizza, a small Islamist group that was broken up in 2012 by the French government for fomenting extremism among young French Muslims.
Diaby, a Frenchman of Senegalese descent, was known at first for producing radical propaganda videos but he is said to have traveled to Syria in 2013. His hometown of Nice was the victim of a jihadist attack in July this year, when 86 people were killed as an attacker drove a truck into a Bastille Day
crowd.
Diaby is known to recruit in the Nice area and intelligence agencies have long feared that militants returning from Syria will bring the war with them.
French police sources have also told AFP that Diaby's name came up in March as officers in Paris investigated a suspect arrested for “planning violent acts.”
Now that Diaby is a “Specially Designated Global Terrorist” under US law, American firms and individuals are barred from associating or doing business with him.