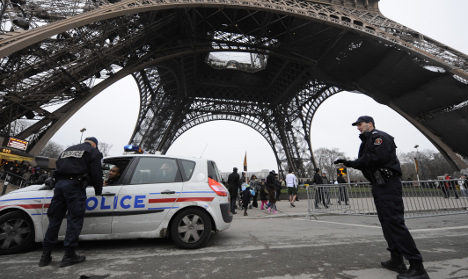 Photo: AFP
There has been a 49 percent increase in traffic infringements among Paris police over the first half of 2016.
In a memo seen by Le Parisien newspaper, police chief Michel Cadot said the traffic offences were simply “too numerous”.
His solution?
“For the most serious infringements, those driving the service vehicles should be asked to pay the fines,” he wrote.
The problem with this, of course, is that the police officers say they're only breaking the rules when they're out chasing criminals.
The most common offences were running red lights, speeding, or illegal parking.
But Paris police officers haven't been afraid to show their disapproval at being told to fork out.
The Alliance police union released a set of ironic slogans to the would-be criminals of Paris, urging them to cooperate with the long arm of the law.
“Armed robbers, thieves, drug dealers, please, stop at the red lights so we can catch you,” the union wrote.
“Terrorists, only cross the road when the little man is green,” another one said.
Meanwhile, a representative at the Unsa police union asked if officers should perhaps start chasing criminals using the Metro or use the city's bike-rental Velib' scheme.
Police have said that the reason for the upswing in fines has been the increase in callouts thanks to the national state of emergency that has been in place since November last year.
A member of the Synergie-Officiers union said that they go through “constant callouts for suspicious packages or individuals, when they have no choice but to arrive hastily”.
An unnamed police investigator said the memo was “appalling”.
“You get the feeling that those at the top of the hierarchy have a total disregard for our work,” the investigator told Le Parisien, adding that the increase in fines was directly related to the extra callouts since the November terror attacks.
Responding to the uproar a spokesperson for the prefecture of police told Le Parisien that the memo was meant as “a simple reminder of the rules of the road.”