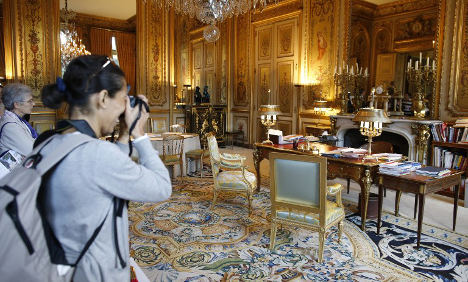 Why not check out François Hollande's desk? Photo: Journées du Patrimoine
This year, the theme is “Heritage and Citizenship” and some 10 million people are expected to take the chance this weekend to poke around inside some of the country's most interesting sites.
The openings are part of the annual Heritage Days (Journées du Patrimoine), which will see the sites mostly opened free of charge for visitors.
Due to security concerns and the ongoing state of emergency, several sites have pulled out this year including the headquarters and regional offices of France Television, the abbey at Soligny-La-Trappe in the Orne department, the theatre in Castres, and the prefecture in Lille.

The mayor of Beaulieu-sur-Mer decided to cancel everything because he couldn't afford the costs of all the security guards needed. Other mayors say they need financial help from the state to cover the costs of barriers and extra shifts for security guards.

But despite these closures, France's Ministry of Culture insists the number of cancellations is limited.

In fact, you can see all the 15,000 options on offer by clicking here for an interactive map.
Here are ten of note that we picked out.

It is now considered the world’s oldest. At the YMCA on Rue de Trévise in Paris’s 9th arrondissement. Archeology up close: Excavated since 1964, the Pincevent site has become particularly known for its early modern human remains, such as stone artefacts, found there.

It's near the town of Montereau-Fault-Yonne. Water temple: Built between the 16th and 17th centuries, and extended during the 18th, these Roman-style underground aqueducts provide a fascinating look at how human's have tried to make sure they have enough water.

This one's on Rue de la Fontaine in Mennecy.

Jewellery in Paris
Nestled in the ninth arrondissement and not far from Place Vendome is the Bucherer Boutique, founded in 1888.
The building itself is like an emblem of the Opera area, and inside you'll find the world's biggest specializers in watches and jewellery.
Find it at 12 Rue des Capucines. Vintage Citroëns: If you’re a car buff, what better place to spend the day than at the Citroën museum?

Hosting more than 300 rare cars with makes dating as far back as 1919, including the Paris-Dakar Race winner ZX Rallye Raid. At PSA Peugeot Citroën, Bâtiment Conservatoire, on Boulevard André-Citroën in Aulnay-sous-Bois.

After founding a hardware company in Paris in 1816, Antoine Menier began to sell some pharmaceutical products as well, despite the fact that he was not a trained pharmacist.

He used cocoa powder as a medicinal powder and to coat bitter-tasting pills. The company expanded to a factory in the village of Noisiel, just outside of Paris, and after a modernization a few years later, became the first mechanized mass production factory for cocoa powder in France.

Drive 45 minutes' from Paris to 4 rue Nicolas-de-Lancy, close to Senlis in the Oise department, to find this impressive chateau.
It dates back to the 17th century and is surrounded by huge fields and woodlands.
It's the first time it will open to the public as part of Heritage Days, so make the most of it while you can.
But be warned, opening times are limited to Sunday at 10.30, 11.30, 14.30, 15.30, 16.30, and 17.30.
PM's offices: Where does French Prime Minister Manuel Valls and his cabinet hang out all day?

Find out by walking around the Hôtel de Matignon located on Rue de Varenne in Paris’s 7th arrondissment. Heliport Paris
Take a closer look at the city's helicopter collection – these are the choppers that put out fires, save people's lives, or shoot movie scenes from high in the clouds.
Entry is free, but limited to just Sunday from 10am to midday, and 2pm to 5pm.
Address: 61 rue Henri Farman in the 15th arrondissement.
National Archives
Take a glimpse through the hundreds of kilometres of corridors worth of archived material here in the heart of the Marais.
Everything from the most important documents from France's history to the tributes left behind for the victims of the Paris terror attacks last year, this is a unique chance to take a look at another side of France.
Address: 60 Rue des Francs Bourgeois