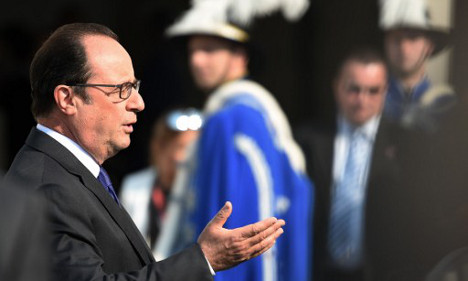 Photo: AFP
“France is making the main effort on European defence but it cannot be alone and does not want to be alone,” Hollande said as he went into the summit in Bratislava with security top of the agenda.
Hollande, whose country will be the bloc's top military power after Britain's departure, has joined forces with Germany to push the idea of a “more active” defence policy to restore confidence shaken by terror attacks, the migrant crisis and globalisation.
Hollande said France wanted to work with its partners to assure Europe's defence, in line with the alliances it has, namely with the United States in NATO.
But at the same time, Europe was ready to stand on its own two feet if need be, he said, apparently referring to remarks by US Republican presidential candidate Donald Trump that in a crisis the US-led alliance might think of its own interests first before its NATO commitments.
“Let everyone know that if the United States chooses to draw back, Europe must be able to defend itself,” Hollande said.
The 27 European Union leaders are meeting without Britain to map out a post-Brexit future, with increased defence cooperation a key issue to rally a disillusioned public.
European Commission chief Jean-Claude Juncker this week proposed an EU defence headquarters, underscoring how the EU is keen to move on now it no longer has to worry about Britain's long-term opposition to any European Union army which would undermine NATO's role.