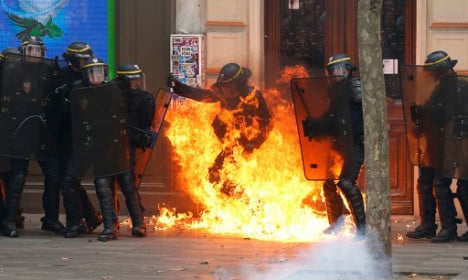 There were ugly scenes in Paris and Nantes on Thursday during the latest round of protests against the controversial labour reforms.

Opponents of France's new labour laws, which were passed through parliament this summer, held demonstrations across France on Thursday afternoon.

The protest marks the 14th of its kind in six months, and saw 1,200 police in Paris alone turn out to keep an eye on proceedings as protesters marched between Bastille and Place de la Republique.

The march descended into violence, with protesters throwing missiles at police, who responded by firing tear gas. Protesters also lit bins on fire and sprayed graffiti on the walls.

One protester and five police were left injured, reported AFP. One officer suffered leg burns from a Molotov cocktails thrown at the police.

Police estimated the crowd in Paris to number 12,500. though the CGT union that called for the protests put the figure as high as 40,000. A protester in Paris. Photo: AFP The protests come as the hard-line CGT union called for strikes on airlines and train lines across the country.

The laws aim to make the labour market less rigid by among other things making it easier for companies to lay off staff in times of difficulty.

The laws also aim to reduce the power of trade unions in smaller businesses by allowing bosses to make agreements on working conditions directly with staff.