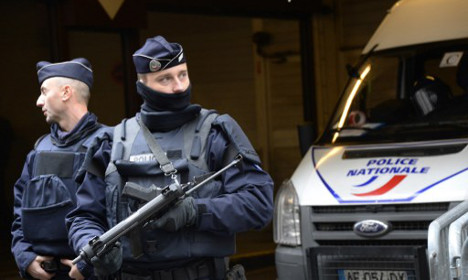 Police in France are on high alert for more terror attacks. File Photo: AFP
The first teen was arrested in the 20th arrondissement of Paris on Wednesday morning, sources close to the investigation told the BFM TV channel.
A search was being carried out at the boy's home following his arrest, reports say. It is believed he was not previously known to police or intelligence services.
The boy had allegedly offered to carry out a terror attack and had been in touch with Rashid Kassim, a French jihadist who has been linked to several other recent attacks in France.
Details of what kind of attack had been planned and where have not yet been made public, but BFM TV claims the youngster had tried to get hold of a weapon to use in his attack.
It was revealed on Wednesday afternoon that yet another 15-year-old boy had been arrested due to terror links.
This time, the teen was arrested on Thursday afternoon in Rueil-Malmaison, in the western suburbs of Paris. He had also been linked to Kassim via the Telegram app.
Interior Minister Bernard Cazeneuve said on Wednesday that the intelligence services were “working harder than ever” to prevent assaults incited by “a number of characters in Syria who used encrypted methods to call on young people to carry out attacks.”
Kassim, meanwhile, has been linked to the double murder of two police officers in Magnanville in June, as well as to the brutal slaying of the priest in Saint-Etienne du Rouvray, near Rouen in July.
He has also been linked to another 15-year-old boy arrested on Sunday on suspicion of plotting a knife attack on people in Paris, and to at least one of the women arrested last week over a car found abandoned a week ago near Notre Dame cathedral in Paris.
France is still in an official state of emergency after the November attacks in Paris and the country's police and intelligence services are on high alert for further plots.
The French PM revealed this week that some 15,000 potential terror suspects are being watched and that plots to attack France are being foiled almost on a daily basis.