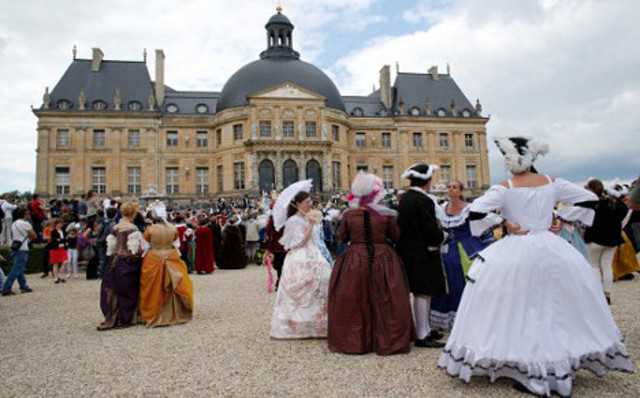 There are endless chateaux across France to visit, from tiny crumbling estates to splendid gilded palaces.

Many are firm favourites with tourists: Versailles alone draws in more than 7 million visitors a year, while the cluster of magnificent châteaux in the Loire Valley are busy all year round.

But let's take a step past the best known ones, and consider France’s lesser-known and more unusual châteaux.

If you’re doing the Alsatian wine route, make sure you take a look at the château du Haut-Kœnigsbourg at Orschwiller in the Vosges mountains, a medieval red-brick castle sitting high above the Upper Rhine Plain. Built during the twelfth century, it was given a comprehensive face-life in the early twentieth century – when Alsace was in German territory – on the orders of Wilhelm II, the last Emperor of Germany. Expect saltires and tartan in Aubigny-sur-Nère, ‘France’s Scottish town’. Its unusual heritage can be traced to John Stewart of Darnley, a Stuart who came to France in 1419 to fight for Charles VII. He was given the title of Lord of Aubigny and his family stayed on in France for years after. The town is proud of its Scottish links and celebrates every Bastille Day the Auld Alliance (an old alliance between Scotland and France). The fifteenth-century Castle of the Stuarts – now the town’s Mairie – houses a museum dedicated to the Alliance.

This Renaissance château is most famous for its connection with Leonardo Da Vinci. The artist came to France in 1516 on the invitation of King François I, and he was staying in Clos Lucé – in the city of Amboise in the Loire – when he died in 1519. The castle is now a museum dedicated to the artist and his works. It sits in the shadow of its more imposing neighbour, the Château d’Amboise, to which it is connected by an underground tunnel. The ruined Castle of Montségur is one of the most famous ‘Cathar castles’ in the Languedoc region. In the thirteenth-century the papacy launched the ‘Albigensian crusades’ against the Cathars, a branch of Christianity that it saw as heretical. Many Cathars and their supporters hid in fortified castles in the foothills of the Pyrenees. Montségur – which sits at a vertiginous altitude of 3,900 feet – was one of the last to fall when it surrendered in 1244 after a ten-month siege. The fortification was razed to the ground and later rebuilt by Royal forces. The Palais Idéal was a product of the weird and wonderful imagination of a postman, Ferdinand Cheval, who lived at the turn of the nineteenth century. Over a period of thirty-three years (between 1879 and 1912), Cheval used stones collected on his daily post run to gradually build up the Palais’ complicated and other-worldly structure. He was 76 when he finally finished it in 1912. In 1969 it was named an official historic monument. According to legend, Château d’Ussé’s fairytale aspect inspired both the story of Sleeping Beauty and the Disney Castles. Mostly built in the sixteenth and seventeenth centuries, the castle is located in the Loire Valley, near to the river Indre and the Chignon forest. If you visit, be aware that the castle is still inhabited by the Blacas family so some bits are closed off to the public. A ruined medieval Norman Castle overlooking the Seine, the Château Gaillard was built on the orders of King Richard the Lionheart, who also held the title of Duke of Normandy. The castle was finished after a mere two years of construction in 1198 and was seized by King Phillip II of France in 1204. The English captured it again during the Hundred Years’ War, but from 1449 onward it stayed in French hands. You can visit the outer bailey for free all year round and the inner bailey is open from March to November. The Château de Flaugergues is a seventeenth-century mansion found near Montpellier in Languedoc. It is one of the Montpellier ‘follies’ or ‘houses in the foliage’, a group of country houses built by rich merchants and aristocrats in the late seventeenth and eighteenth centuries. Highlights at Flaugergues include its beautiful park, gardens and vineyards, as well as a collection of seventeenth-century Flemish tapestries. And lastly, if you’re in the Paris region and have already ticked off Versailles and Fontainebleau, consider visiting the Château de Vaux le Vicomte in Maincy, an easy drive from Paris.

Aside from its beautiful gardens, splendid Baroque architecture and candlelit evenings, Vaux le Vicomte also has a stirring back-story. Its present form took shape under the orders of Nicolas Fouquet, a seventeenth-century politician who scaled the ranks of the French state to become Superintendent of Finance in 1653.

Fouquet, however, was a victim of his own success: soon after a lavish fete at the château attended by the King himself, Louis XIV had Fouquet arrested. The celebration had been too impressive and the superintendent's home too luxurious. Even though his plan had been to flatter the king, Fouquet was given a life sentence and died in prison in 1680.

Voltaire wrote of Fouquet’s spectacular fall from grace: ‘On 17 August, at six in the evening Fouquet was the King of France: at two in the morning he was nobody’.