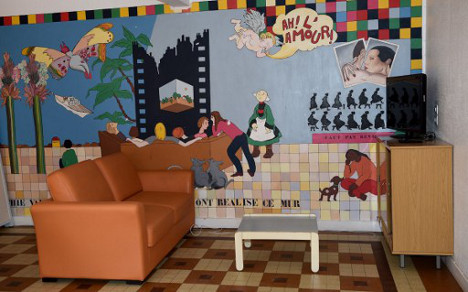 Inside the new centre. All photos: AFP
The Pontourny centre is located in Beaumont-en-Véron in the Indre et Loire department of central France.
And while the transformation of the building's interior is not quite finished yet, reports BFMTV, it will welcome around a dozen youths who have been radicalized towards jihadism by the end of the month.
“These are individuals who are at a breaking point in their identity, who hold hate speeches against the West,” Amélie Boukhobza, psychologist and expert on jihadism, told the channel.
“We will work with them around the clock, so we can truly hope to change things, to work, and to tackle this together with them.” A classroom in the centre. Photo: AFP
The news hasn't been taken well by locals, dozens of whom protested outside the building on Tuesday.
The head of the protesters said that while he wasn't so worried about the people inside the centre, he was concerned that the centre itself could be a target for Isis.
“The security measures are simply insufficient,” Michel Carrier, the head of the group told the channel.
Authorities will be keeping a close eye on developments, however, as France plans to roll out 12 more similar centres by the end of next year. The gym. Photo: AFP
The Pontourny centre will be a kind of boarding school for people aged 18 to 30 who may have tried and failed to travel to the Middle East, but not for anyone with existing terror convictions.
Authorities have stressed that those staying are doing so on a voluntary basis, and that they will be free to return to their families at weekends.
The building has officially been labelled as a centre for “reintegration and citizenship”, and had been a home for unaccompanied foreign minors for the past few years
It comes with a gym, classrooms, and bars on the windows (see below). When completed, it will be able to accommodate 30 people for a ten-month stay, with possibilities of undertaking an internship in nearby companies.
Hundreds of radicalized individuals have left France to fight jihad in the Middle East, with authorities increasingly concerned about those who have returned home. The centre itself. Photo: AFP