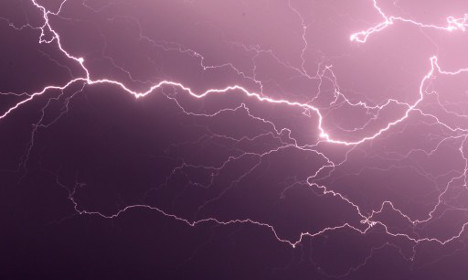 France's weather agency placed 16 departments on the western side of France on orange alert on Tuesday afternoon due to heavy storms.

The Météo France agency predicted violent thunderstorms, featuring hail showers and gales set to sweep in from the west.

“This wave of storms will be marked by a high risk of localised hail storms, violent gusts of wind reaching 80 to 90km/h, possibly passing 100km/h,” reads the warning on Météo France.

Another four departments, Aveyron, Gard, Hérault, and Lozère were also placed on alert for flood warnings.

In total, 20 departments are on alert, up from 11 on Tuesday morning. Intense downpours are predicted for Tuesday afternoon in the west, with 60mm of rainfall forecast in some areas over a short space of time.

The alerts will last until Wednesday at 8pm, the agency noted.

Temperatures have been high in the western region, including up to 35C in Dordogne, but these temperatures gave way to storms throughout the afternoon, which hit the western end of the Pyrenées mountains first. Elsewhere in France it was a different story.

The Ile-de-France region around Paris was placed on yellow alert – the one below Orange – for a mini-heatwave which saw temperatures sneak into the low 30s on Tuesday.

It will be a second hot night in a row, with temperatures unlikely to sink below 20C throughout the night.

Residents in the south of France have also been asked to be on alert for wild fires due to the ongoing high temperatures and lack of rain in the region. High winds have exacerbated the danger. France’s General Direction of Civil Security is asking people to be extremely careful on Tuesday in the departments that lie on the Mediterranean coast, where wildfires have already burned hundreds of hectares of land this summer.

Temperatures are set to fall towards the end of the week as the storms make their way across the country which should herald the arrival of typical autumnal weather.