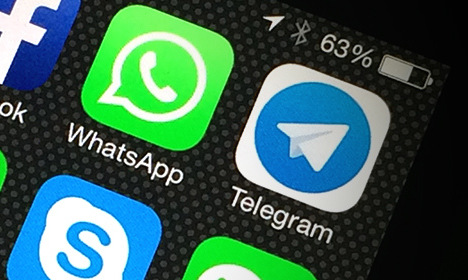 Photo: Álvaro Ibáñez/Flickr
The free-to-download instant messenger, which allows people to exchange messages, photos and videos in groups of up to 5,000 people, has attracted some 100 million users since its launch in 2013.
And there are a couple of features that make it particularly attractive to jihadists, who can not only rest assured that their private messages are out of the reach of intelligence officials, but can disperse propaganda on YouTube-like public channels.
After Isis gunmen and suicide bombers massacred 130 people in Paris in November, Telegram blocked dozens of public channels that were being used to spread extremist messages.
But Russian Internet guru Pavel Durov, who founded Telegram with his brother Nikolai, insisted that not even he has the power to intercept users' private chats.
In France, which has suffered a string of further jihadist assaults since the Paris carnage, investigators are still dealing with fallout from the communications of a Isis member suspected of using Telegram to direct people to carry out attacks.
Rachid Kassim, a 29-year-old Frenchman who has regularly appeared in Isis propaganda videos shot in Syria or Iraq, was able to urge some 300 contacts to commit attacks on home soil, notably publishing a list of targets and scenarios for how to carry them out.
Among his contacts were Larossi Abballa, who knifed to death a senior policeman and his partner in the Parisian suburbs in June, and two teenage jihadists who slit the throat of an elderly priest in a northern French church in July.
Kassim has been back in the news this week after it emerged that  female jihadists suspected of plotting to blow up a car filled with gas cannisters near Paris' Notre Dame cathedral were on his contact list.
Unable to get past Telegram's impenetrable encryption, the best intelligence officials can hope for is to sneak into extremist chatrooms by posing as jihadists — but they're bound to attract suspicion unless they talk the talk convincingly.
“Infiltrating is possible, but you have to be a good actor and have a lot of cultural and religious awareness to get away with it,” one investigator said.
$300,000 code-cracking challenge
So confident is Telegram in its encryption, it has offered up to $300,000 to anyone who manages to crack its system.
Moreover, the app has a feature that allows users to set messages to auto-destruct, making it impossible to recover them later for use in investigations.
Even in the realm of public jihadist propaganda on Telegram, it is “practically impossible to track the millions of messages that are exchanged every hour”, one investigator lamented.
French intelligence chief Patrick Calvar described the app in May as “the main network used by terrorists”.
“We bump into encryption problems on a daily basis, as the means of communication multiply along with the amount of data that we have to gather,” he said, adding that encryption is “a major question that only international conventions can decide on”.
The use of such apps, which soared after Edward Snowden's revelations of mass US surveillance in 2013, has sparked debate over the balance between Internet users' right to privacy and the need for security agencies to protect the public.
Last month the interior ministers of France and Germany urged the European Commission to regulate encrypted messaging apps.
Telegram's makers said after the Paris attacks that they were “disturbed” it was being used by jihadists, but they are staunchly pro-privacy and have blasted Internet giants Facebook and Google for giving data to third parties.
French investigators say they do not even know who within the Berlin-based company they should legally petition for information that could help piecing together a case, such as confirmation that a suspect is the holder of a particular Telegram account.
“We do not know who in Telegram to send our requests to — there is no judicial entity or legal department like there is at Apple or Microsoft,” one investigator complained.