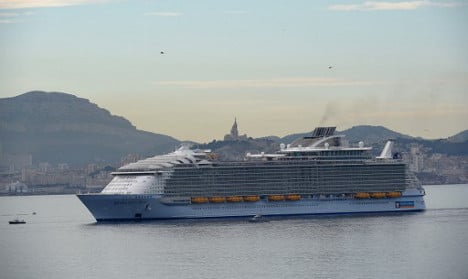 An image showing the Harmony of the Seas entering the port of Marseille in June this year. Photo: AFP

The fatal accident comes just three months after the cruise liner hit the high seas for its much-hyped inaugural voyage.

The victim was from the Philippines and was aged 42-years-old.

The other victims were three Filipinos and an Indian man.

According to the local Provence newspaper the accident happened when one of the ship's life boats with five people on board became detached during a “simple security exercise” while the ship was in a stop over at the port of Marseille.

The life boat plunged some 10 metres, according to the Julien Ruas, one of the deputy mayors of Marseille said.

It fell from the fifth level on the side of the boat that was facing the sea, rather than the side that adjacent to the quay.

The victims were members of the cruise ship’s crew. Two of four injured are said to be in a critical condition after suffering multiple injuries, while the other two were not believed to be in a life threatening condition.

“One person is dead and four are injured, including two whose lives are in danger,” a spokesman for the fire service told AFP.

The lifeboat “became detached” from the ship with five people on board, the spokesman said. It is not immediately known why the rescue boat became detached.

An investigation has been opened to find out why “the cable or the fastenings” holding the lifeboat in place gave way, said the Marseille prosecutor.

“The boat fell suddenly into the water,” he said.

The Harmony of the Seas had only arrived in Marseille early on Tuesday from the Spanish island of Majorca. The 120,000-tonne Harmony of the Seas, capable of accommodating more than 8,000 passengers and crew in the most luxurious conditions.

At 66 metres (217 feet), it is the widest cruise ship ever built, while its 362-metre length makes it 50 metres longer than the height of the Eiffel Tower.

The immense floating town, which cost close to one billion euros (dollars), has 16 decks and will be able to carry 6,360 passengers and 2,100 crew members.

The ship was built for the US-based Royal Caribbean Cruises Ltd (RCCL) by the STX France boatyard in Saint-Nazaire on the Atlantic coast. Among the onboard attractions are “The Ultimate Abyss”, a 10-storey slide from the top deck to the boardwalk which RRCL bills as the world's biggest ship-mounted slide. The purple slide can be clearly seen at the rear of the ship.

Two robot barmen will serve passengers in the “Bionic Bar”.

The ship even has its own high street, and a “Central Park” deck featuring 12,000 plant species.