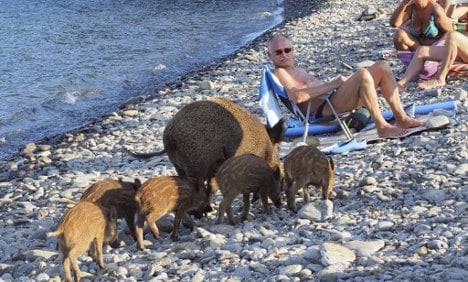 All photos: AFP
The boars are regular visitors to the beach, and are known to wander up and down among the beach-goers, sniff out children's toys,  and even take the odd dip in the waves.
“She's not shy, you can go right up to her, people feed her,” a local restaurant owner told Le Parisien newspaper. “She's the mascot of the beach.”
A video of the boars taking bathing among the waves (embedded below) has even become a Facebook hit, racking up 1.2 million views in just days.
However, the boars won't last long on the beach, with local authorities posting a sign on the beach noticeboard to say the boars will be taken to a nearby zoo before the end of September, Le Parisien reported.
But locals it seems would like them to remain.
Perhaps some entrepreneur could invent the “boarkini” so the animals can enjoy the public space like everyone else.
If the images are anything to go by there does not seem to be a risk of public disorder.
Although as one reader pointed out, things could quickly descend into trouble.

Boarkini ban: If someone, eg a child, gets between a sow and her piglet, then it could quickly turn nasty https://t.co/yHCetdnN7r