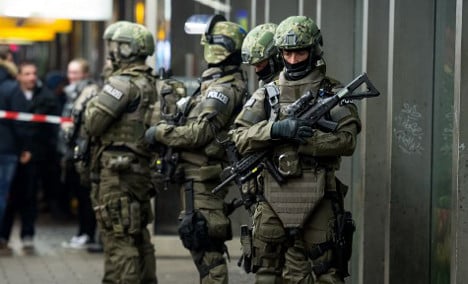 More than 200 police commandos took part in the pre-dawn raids in northern Germany to detain the men, who were suspected of either plotting an attack or awaiting orders to commit one.

The men were identified only as Mahir al-H., 17, Ibrahim M., 18, and Mohamed A., 26, in a statement issued by federal prosecutors.

They left Syria last October and travelled via Turkey and Greece – a route used by tens of thousands of refugees and migrants – and arrived in Germany in mid-November.

“According to what we know so far, the investigation of the (federal criminal office) BKA points to links to the attackers of Paris from November 2015,” de Maiziere told a press conference.

“There is every reason to believe that the same trafficking group used by the Paris attackers also brought the three men who were arrested to Germany,” he said, adding that their forged travel documents came from “the same workshop”.

He said German police had surveilled the men for months and tapped their phones, meaning that at no stage was there a risk of an attack.

Prosecutors said in their statement that Mahir al-H. had joined Isis in its de facto capital of Raqqa, Syria by September 2015 and received some weapons and explosives training.

The following month, all three men had pledged to travel to Europe in talks with an Isis fighter who was “in charge of missions and attacks” outside of the Syria-Iraq region where the group has its self-proclaimed caliphate.

In Europe, “the three accused were meant to either execute a mission or await further instructions,” the prosecution service said in the statement, adding that no evidence of “concrete orders or instructions” had been found.

The men had received mobile phones and four-figure cash sums in US dollars, as well as the fake passports, from Isis, the statement said.

They were detained at three refugee shelters in the northern state of Schleswig-Holstein by more than 200 commandos of the federal police, BKA and police forces of several states.

Warrants for their arrest had been issued by a federal judge on September 7th, based in part on intelligence provided by Germany's domestic security agency, the Federal Office for the Protection of the Constitution.

In July, Germany suffered two bloody attacks claimed by Isis, which were carried out by migrants.

German authorities have urged the public not to confuse migrants and “terrorists,” but have acknowledged that more jihadists may have entered the country among the around one million asylum seekers who arrived last year.

This story first appeared on The Local Germany