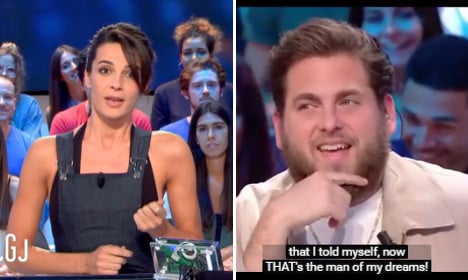 Fleury, the so-called Miss Météo on the popular Grand Journal show on Canal Plus, said sorry to Hill after she had poked fun at him during last Friday’s show.

She had mocked the actor for being sodomised by a three-metre tall demon in one of his films and then suggested her fantasy would be for him to invite his friends Leonardo di Caprio and Brad Pitt round to their hotel room, but then for him to leave.

The actor decided to cancel all his publicity interviews following the exchange on live TV.

Speaking directly to him on camera she said: “Jonah, the problem is that for 10 years I have lived with you through your films. In fact Jonah, I really had the impression that I knew you so last Friday I thought I was just messing around with a friend, but the reality is that we are not friends.

“No the reality is that you two have two Oscar nominations and I have two videos on my YouTube account. You have made films with Scorese and Tarantino and me, I have made an advert for Spontex (a company that specializes in making cleaning products).”

There was no word out of Hill's camp whether the wounded actor had accepted her apology.

In Friday's programme the TV presenter had launched into a sketch, saying she had always fancied him because she first saw him in a film in which he had blood from a woman's period smeared on his knees, referring to the 2007 hit Superbad.

Fleury added that she then saw him masturbate in front of 200 people in The Wolf of Wall Street, which let her know “he was the man for her.”
She also said she had seen him sodomised in This Is The End by a three-metre tall demon.
“And you? I heard you get sodomised on a regular basis,” responded Hill.
The host Ornella Fleury went on: “Anyway, here's why I have a sexual fantasy with you Jonah – all I have to say is sexual fantasy and you guys laugh… guess I don't need to finish the joke…
“My sexual fantasy would be that we would meet up in a hotel room at night. We would chat, you'd make me laugh, you'd make me laugh a lot, and then all of a sudden you'd bring your friends DiCaprio and Brad Pitt… and then you would leave.”
Hill, who sat with a baffled grin on his face throughout the scene, gave a thumbs up then thanked her for “being invited on to the programme to be ridiculed by a local journalist.”
Her sketch left many in France deeply embarrassed, with people takingto Twitter to express their shame.