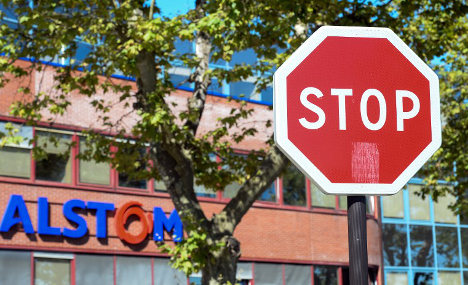 The French power and transport engineering company Alstom factory in Belfort (eastern France). Photo: AFP
Alstom said last week it planned to halt production at the locomotive factory in Belfort, eastern France, prompting a swift response from the Socialist government.
Alstom said it wanted to centralise its train production at a site 200 kilometres (125 miles) further north in Alsace and promised to offer the 400 workers in Belfort other jobs.
But after a cabinet meeting on Monday, Transport Minister Alain Vidalies said production at the site would now continue “in the same proportions as the current level”.
President Francois Hollande said earlier that he had told his cabinet “to ensure that more orders are taken there”.
On Tuesday Hollande said that “Alsom must do France what he has done for Alstom abroad”.
But the board of directors held firm on Tuesday insisting it must close.
“We have maintained production at Belfort for long enough…despite the efforts of everyone it appears impossible today to ensure a long term future for activities at the site,” read a statement from the board.
Belfort is a symbol of French industrial prowess. Alstom's first steam train was produced at the site in 1880.
The prospect of job losses at the factory would have been of concern to the Socialist government, with presidential and legislative elections looming next year.
The French government has a track record of intervening when it deems French companies or jobs to be under threat, particularly from multinationals.
The French government has a 20-percent stake in Alstom.
Vidalies described the company's threat to close the factory as “incomprehensible” because there was a chance of landing new contracts in the near future.
Hundreds of people protested in front of the Belfort factory on Monday, not reassured by the government promises to save the 400 jobs under threat.
“If the politicians manage to do something then great,” said one Alstom worker who preferred to remain anonymous.
“But I' m not expecting much because it's politics… because in the past they've never performed miracles,” the Belfort employee added.
The town's mayor Damien Meslot said that besides those who would be directly affected by cuts if the factory was closed down a further 1,200 indirect jobs would go.
When US conglomerate GE announced a bid for Alstom's energy assets in 2014 the state got involved, getting German group Siemens to put up a rival bid before finally coming down on the side of GE.