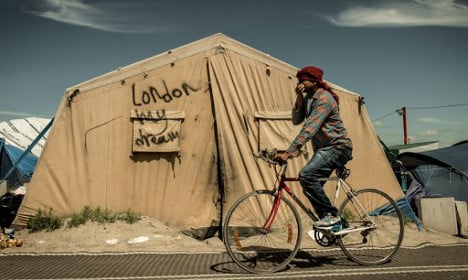 Photo: AFP
The government has made plans to offer shelter to 12,000 migrants in asylum centres across France, according to a document from the Interior Ministry that Le Figaro newspaper has seen.
These will be the migrants who are currently amassed in the squalid Jungle Camp in Calais and in various unofficial camps across central Paris.
“A mobilization scheme has been validated in order to accommodate the migrants from Calais and Paris in shelters across the country,” the document said, according to the paper.

The document was dated September 1st, the paper reported, offering “guidelines” for regional authorities across France.
It remains unclear exactly how the migrants will be distributed across France, although the document said that some 8,200 new spaces would be created nationwide to manage.
No migrants will be sent to Paris, where the migrant lodging situation was ruled to already be “tense”, nor in Corsica, reported the paper. Le Parisien newspaper reported that migrants would be sent to centres that could each hold up to around 300 people, with each region getting a weighted number of migrants relative to regional population.
It added that the moves would begin in mid-October.
In Paris, authorities have a separate plan to open up two humanitarian camps for thousands of migrants in the coming months.
One camp, near Porte de la Chapelle, is due to open by the end of September.
The notice comes as authorities work to relieve the pressure at the crowded Jungle camp in Calais, where police estimate that around 10,000 migrants currently call home.
This figure is up from the 4,500 estimated by aid groups in June this year.
“Soon there'll be so many people in the 'Jungle' that each passing day makes a mass evacuation all the more risky,” Jean-Claude Delage of the police union Alliance told Le Figaro late last month.
The nearby Grande-Synthe camp, not far from Dunkirk, hosts another 2,000 or so migrants, taking the population of in the northern reaches of France up to around 12,000. While the number of migrants in the camp causes immigration authorities to fret, it has also been raised as a security issue for France.
Senior police officers in Calais have also said that the migrant camp was a “blind spot” in France's security.
“It's truly mind boggling what's going on there,” said an officer of the CRS force, which is tasked with maintaining public order. “It's worse than ever.”
“It's impossible to know if, for example, a jihadist from Belgium is hiding in there. This camp is a blind spot for national security in the middle of the state of emergency.”
And the camp isn't always a peaceful one.
There have been numerous reports in the French press of some of these migrants getting involved in brawls in the camp, with one Sudanese migrant killed last week in clashes with Afghan migrants.
Denis Hurt of the police union Unsa estimated that around 20 migrants make it to the UK each night, with some of them turning to violence to get there.

But not all find the “El Dorado” in England that they expected, with Hurt adding that sometimes migrants actually return to Calais once again.

Work is set to begin this month on a giant wall, funded by Britain, which aims to block migrants from trying to jump aboard lorries heading for the port of Calais. However, aid organizations say it is a waste of money and “nothing will deter” the migrants from attempting to reach their desired destination.