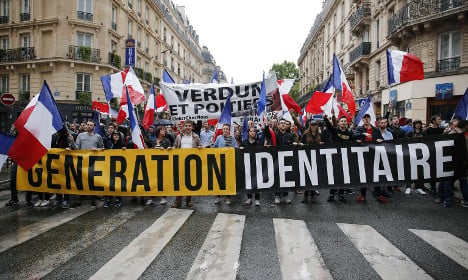 Members of Generation Identitaire in a march against immigrants in Paris this year. Photo: AFP
Far-right group Generation Identitaire has plans to open a new bar in the centre of Lille, just 200 metres from the Grand Palais.
It will also contain a boxing gym, a cinema, and a library, mainly planned to function like a headquarters for the group's supporters in the northern city.
The bar, called La Citadelle, is scheduled to open on September 24th, but has already prompted calls for the bar to be banned.
A petition launched by local Greens councilor Josiane Dabit has garnered over 4,300 signatures since Friday.
“There's just one word: Unacceptable,” reads the petition, which has been addressed to the town's mayor.
“I am deeply concerned, this place will propagate hate and cause incidents that are beyond control,” she told the local La Voix du Nord newspaper.
“In a city where we pride ourselves on living together, a bar like this simply doesn't have a future.”
One comment below the petition says that the bar “doesn't reflect the typical human exchanges in Lille”.
Generation Identitaire was launched in 2012 and calls itself the “first line of resistance against mass immigration”, and urges younger people in France to “fight for their identity”.

It is described as the youth wing of the extreme right Bloc Identitaire movement that was founded back in 2003 and designed to be a “rally for young French and Europeans who are proud of their roots and of their heritage.”

Generation Identitaire made headlines in November 2012 when members occupied the construction site of a new mosque in the town of Poitiers.

They climbed onto the building's roof and displayed a banner marked with “732 generation identity” in reference to the year 732, when Charles Martel halted the advance of the invading Muslim army to the north of Poitiers.