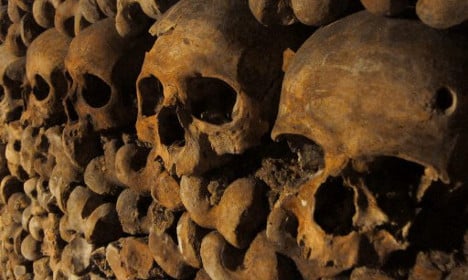 Photo: AFP
The 45-year-old man died at the end of what was apparently a drug-fueled party, according to a report in Le Parisien newspaper.
He was in a group of six people that broke into the underground tunnel system on Saturday night, the paper reported.
They allegedly took alcohol and drugs with them into the catacombs, partying in the underground corridors until Sunday morning.
But the 45-year-old reportedly suffered a heart attack towards the end of the party, and his companions resurfaced in the fifth arrondissement at around 8.40am to call emergency services.
Paramedics headed down to find the man but were unable to revive him. (AFP)
The network of tunnels is off limits to the public during the nights, but has become popular with some groups who sneak inside for secret meetings, parties, and even movie showings. They are known as “cataphiles”.
Paris has a specialist police team that search the tunnels looking for illegal “cataphile” parties.
The catacombs are also known as “The World's Largest Grave”, and are said to hold the remains of six million people through some 250 of tunnels.
The weekend's incident is not the first time an illicit party under Paris has gone awry.
In 2011 three young people spent an unnerving 48-hours roaming in the dark among the millions of skeletons.
The two men and one woman were part of a group of five who were reportedly drunk when they went down into Paris’ famous catacombs.
The group became separated with two managing to find their way out. The remaining three, all in their early 20s, were not so fortunate and spent two more days trying to find their way out.
In 2013 it emerged that authorities in Paris were also having to battle a particular group of unwanted visitors wandering through the underground tunnels.

“We receive at least one request [for permission to film or take photos] every week,” a spokesman for the Musée Carnavalet, which manages the catacombs, told French daily Le Parisien.

Image copyright of the artist, courtesy of Waterhouse & Dodd (waterhousedodd.com)

Denied permission, the underground adventurers take matters into their own hands by disguising themselves as ordinary members of the public to get past the guards.

“These sly people pass themselves off as tourists, hiding all their equipment, like cameras, in bags. Then as soon as they get downstairs, the girls strip off, the crew films without any fuss, and they leave, unseen and unnoticed,” a regular visitor to the catacombs told Le Parisien.