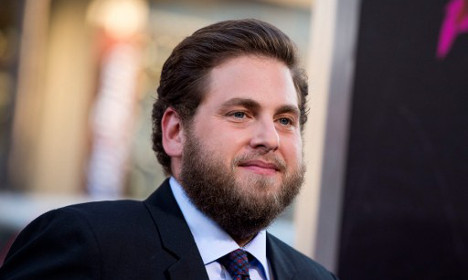 Photo: AFP
Funnyman Jonah Hill isn't laughing this time.
After a gag from a French TV hostess appears to have backfired, the US actor cancelled all press interviews at the cinema festival in Deauville where his new movie was being presented over the weekend, reported BFM TV.
The TV presenter on Friday's Grand Journal programme had launched into a sketch, saying she had always fancied him because she first saw him in a film in which he had blood from a woman's period smeared on his knees, referring to the 2007 hit Superbad.

She added that she then saw him masturbate in front of 200 people in The Wolf of Wall Street, which let her know “he was the man for her.”
She also said she had seen him sodomised in This Is The End by a three-metre tall demon.
“And you? I heard you get sodomised on a regular basis,” responded Hill.
The host Ornella Fleury went on: “Anyway, here's why I have a sexual fantasy with you Jonah – all I have to say is sexual fantasy and you guys laugh… guess I don't need to finish the joke…
“My sexual fantasy would be that we would meet up in a hotel room at night. We would chat, you'd make me laugh, you'd make me laugh a lot, and then all of a sudden you'd bring your friends DiCaprio and Brad Pitt… and then you would leave.”
Hill, who sat with a baffled grin on his face throughout the scene, gave a thumbs up then thanked her for “being invited on to the programme to be ridiculed by a local journalist.”
Watch the clip, with subtitles, below.