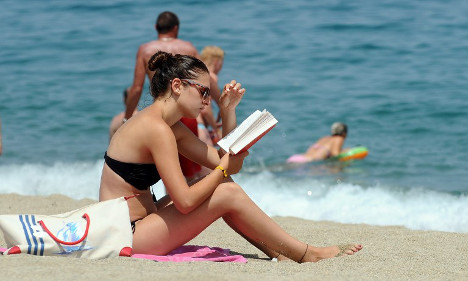 Photo: AFP
September is almost half way through, but you could be forgiven for thinking it was still the middle of summer.

Monday and Tuesday are expected to see temperatures between six and seven degrees warmer than usual in most of the country, according to forecasts from national weather agency Météo France.
This means that Monday will see the mercury pass above 30C across the vast majority of the country, in fact everywhere besides the north western and south eastern corners (see map below).
Temperatures will soar as high as 35C in the south of France and Paris iis expected to hit above 30C.
The map below shows France between 2pm and 5pm on Monday. Photo: MétéoFrance
But wait, there's more.
Tuesday will be another great chance to catch some sun, with the temperatures continuing to soar as the Indian summer passes through.
Météo France has forecast temperatures to reach around 30C pretty much everywhere, once again, and as high as 33C in central Paris.

The warm weather is expected to continue until late on Tuesday when thunderstorms will move in from the west.

The two maps below show Tuesday from 2pm to 5pm, followed by 5pm to 8pm when the rain begins. Photo: MétéoFrance
Thunderstorms and showers will gradually sweep across France from the west across Wednesday, so if you want one last hurrah in the sun then take the chance today and tomorrow.