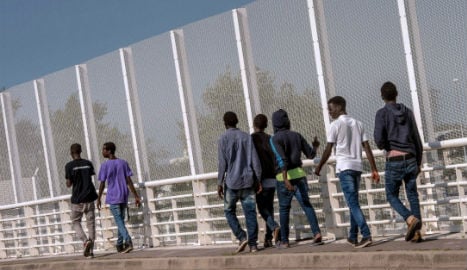 Migrants walk along the fence next to the Jungle camp. Photo: Phillippe Huguen/AFP
The initiative however has met with controversy on both shores.
What will the wall look like?
The so-called “anti-intrusion” wall will  stretch one kilometre (around 0.6 miles) and will be about four metres (13 feet) high and be an extension of high wire fences on each side of the highway leading to the port of Calais.
Made of concrete panels that can be removed when no longer needed, it will be equipped with cameras and a lighting system in order to monitor any attempts to scale over it. Construction is set to begin this month and should be completed by the end of the year as it is expected to take about 12 weeks to put up the wall and another eight weeks to install the video surveillance and lighting.
Britain has agreed to pay for the construction which is estimated to cost 2.7 million euros ($3.0 million, 2.3 million pounds).
What is its purpose ?
In Calais between 6,900 and 9,000 migrants live in the squalid camp known as the “Jungle”, the biggest slum in France, Situated near the highway leading to the port, the migrants — mainly men
from the Middle East and African nations such as Somalia and Sudan — try to block the lorries on their way to the Channel tunnel or ferries so they can jump on board and hide inside to get across to Britain.
“This wall is going to prevent migrants from invading the highway every night. They put tree trunks, branches, gas cylinders” in the road to stop the trucks, said Jean-Marc Puissesseau, CEO of the Calais port.
“We can no longer continue to put up with these repeated assaults,” he said. Regional authorities say the wall will improve security and is part of a long term strategy to discourage traffickers from trying to smuggle people through Calais.
Who is opposed to it?
Some elected officials, including Calais Mayor Natacha Bouchart, are sceptical. She says there is no need for a wall because the French government has promised to close down the Jungle camp as soon as possible — a move Paris says will be done in stages. Volunteers from the various charities helping the migrants in the camp of tents and makeshift shelters are mostly opposed to the project as useless and
costly.
French police union Gilles Debove says while the wall may mean fewer police will need to be deployed, on the other hand the migrants will likely move to the nearby A16, another highway in the region. In the UK, which will pay the bill, the wall has numerous critics.
The Greens have called it “monstrous” and a Citizens collective has said the money would be better spent to help minors stuck in Calais to be reunited with family in Britain. Richard Burnett, chief executive of Britain's Road Haulage Association, has called the scheme “poor use of taxpayers' money”.
Where are there such walls?
After the fall of the infamous Berlin Wall, there were about 16 walls blocking borders around the world. Today there are some 65 walls, built or under construction, according to researcher Elisabeth Vallet of Quebec
University.
Examples can be found on all continents: there is Israel's wall in the
occupied West Bank, the 4,000 kilometre-long barbed wire barrier that India built along its border with Bangladesh, and the enormous sand dike in the Sahara desert that separates Morocco from the regions held by the Polisario rebels of Western Sahara.
The latest talk of border walls has come from the Republican US presidential nominee Donald Trump who says if elected he will have a wall built on the 1,600 kilometre long border between the United States and Mexico.